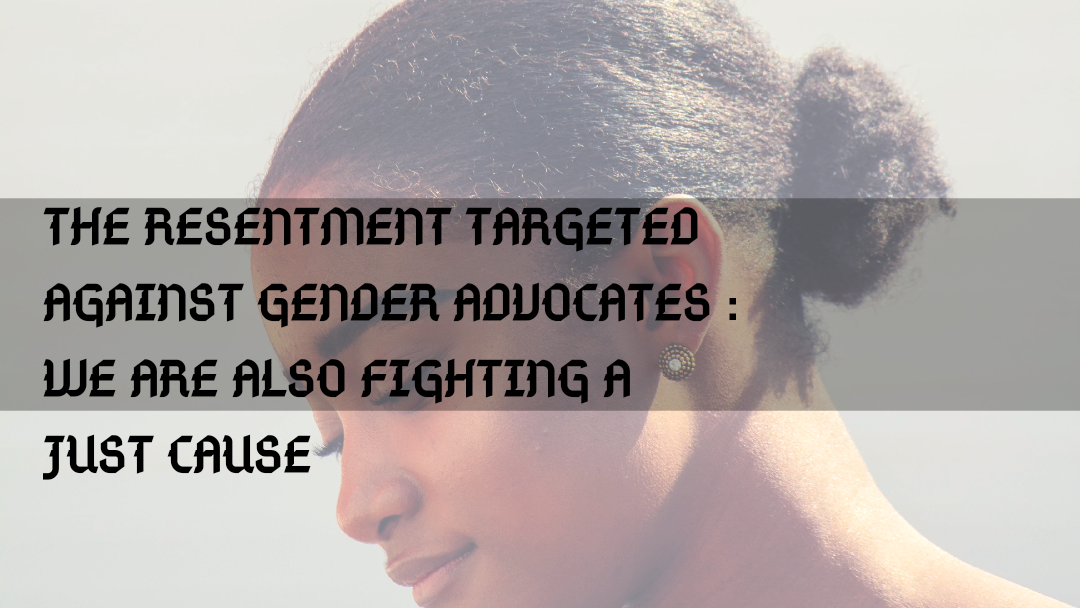 I am active on social media. There, I get to table my thoughts, and share my views with like-minded individuals, receive criticism on my advocacy from genuine critics, and get tongue-lashed by narrow-minded humans.

Recently, I was on Twitter, and I came across someone who, basing his argument on the global suspension of football no thanks to coronavirus, argued that more feminists will become busy bees about advocacy, trying to win more hearts over to the cause. And from the precedents of his tweeted argument and the succeeding tweets, you could tell he had an ax to grind with gender advocacy.

And like nectar (or honey) to bees, many people commented their support to his assertion. You should guess what most of them would say: the trite rhetoric that they are tired of feminists and their cries for equality.

Was I surprised that the tweeter had such strong backing? No. Did I find it odd that the tweeter made such a baseless assertion? Yes. He is a staunch education advocate; he uses his social media platforms to champion the cause of Quality Education. He must have studied the course in school, or perhaps, he has a great understanding of the subject, thus, the reason for his religious passion. The one-million-dollar question remains: why does he have a problem with people who have gone to school to study gender studies and have also chosen to champion the cause of gender equality on their social media platforms?

I guess that is a question that requires some factfinding.

Need I remind you that The United Nations has 17 Sustainable Development Goals (SDGs). These goals are the plans that the United Nations is working towards and hopes that the world would have achieved by the year 2030. Perhaps I should nudge you towards the reasoning that these goals are geared towards a corporate world transformation and making it a better place. They are outlined vis-a-viz: The 17 (SDGs) include GOAL 1: No Poverty, GOAL 2: Zero Hunger, GOAL 3: Good Health and Well-being, GOAL 4: Quality Education, GOAL 5: Gender Equality, GOAL 6: Clean Water and Sanitation, GOAL 7: Affordable and Clean Energy, GOAL 8: Decent Work and Economic Growth, GOAL 9: Industry, Innovation, and Infrastructure, GOAL 10: Reduced Inequality, GOAL 11: Sustainable Cities and Communities, GOAL 12: Responsible Consumption and Production, GOAL 13: Climate Action, GOAL 14: Life Below Water, GOAL 15: Life on Land, GOAL 16: Peace and Justice Strong Institutions and GOAL 17: Partnerships to achieve the goal.

To the crux of the matter.

Lots of people all over the world are committed to actualizing one or more of these SDGs. They are working tirelessly, creating awareness and advocating better health care, quality education, clean water and sanitation, climate action, reduced inequality, and all the rest. Therefore, it’s only natural that some people would be at the forefront of Gender Equality advocacy as well. But there seems to be a little problem. Some people who have dedicated their lives and their social media handles to spreading the message about the SDGs they champion, seem to resent those who are championing the cause of gender equality.

This (dare I say embittered) set of people regard the cause as irrelevant because they air dissenting views about some tenets of gender equality. Some others have a problem with gender equality because of some gender equality advocates that they know. Maybe their lifestyle doesn’t fit their mold, or those people have been caught in the extreme, but I have a few questions to ask. As a person who wants the world to evolve and become a better place, why should you have a problem with someone else because their SDG and their modus operandi are different from yours? Does one lousy egg invalidate an entire ideology? I have friends who went to school and studied medicine, pharmacy, nursing sciences, and all forms of health-related courses. In their way, they are contributing to the realization of UN SDG Number 3. Will their efforts be a waste or the goal for good health be a farce if a doctor or a health worker is sanctioned for unethical conduct? Will the Goal for Peace and Justice be voided if some lawyers or judges are caught perverting justice?

If we can see a cause and its champions as distinct, we sure can do the same for gender equality. Gender equality is requisite to achieving progress in today’s world. You may not agree with everything gender equality represents, but that doesn’t make it any less critical than Education or Zero Poverty. I have had my reservations on some opinions people have aired per other SDGs, but rather than just talk down on their advocacy, I dialogue with the people who champion them. I try to see reasons with them, keeping an open mind because they are experts in the said field.

It’s the same with Gender equality. As many people have gone to school, undergone different kinds of training, and are now carving a niche for themselves through the SDGs they’re promoting, gender advocates are doing the same. Some of them have studied feminism and gender studies up to the doctoral level. They are now making an impact on society while earning from it. A lot of them get paid to host or speak in seminars and conferences. They create programs that help create awareness in communities. They also create and head organizations that are solely aimed at fostering gender inclusiveness and equality in society.

What does that subtly tell you?

We all want the same thing. We want the world to become a better place. Whether you’re passionate about the advocacy for Industry and Innovation, Climate Action, or Aquatic Life, the goal is to transform the world into a beautiful place where everyone is healthy and happy.

I do wish that those people that are passionate about other SDGs (who denigrate and despite gender advocates) would cease. Rather, they should keep an open mind, and let’s discuss these salient issues. Asserting that people should not voice what they’re passionate about on their tweets (or elsewhere, as and when they want) is myopic and uncalled for. If you who champion education talks and tweets about it, you should not have a problem with professional gender experts tweeting what they studied in school.

Or what is the importance of freedom of speech?

Let people speak freely, especially when you know that they mean well (even if you don’t agree with all they say). I’m pretty sure that if gender equality isn’t a worthy cause, one that should redefine the world and reorient people about many a stereotype, it won’t make its way to the UN SDGs.

Hence, rather than resent people who advocate gender studies or speak lowly of it, I will admonish that these humans whose thoughts are skewed and have no liking for gender studies or equality should, instead, sit on the fence in the meantime. At the same time, they need to process their thoughts and pull their heads out of their asses.

If they do not embrace it now, they will sooner or later, when they see the light on the road to Damascus. After all, the purpose of an argument is not to win but to review each party’s valid points and exchange perspectives.

For the sake of peace, we do not have to expound our aversion to what we do not take a liking to. Silence never kills.

I have said my piece, I am at peace.

The Resentment targeted against Gender Advocates: We are also fighting a just cause