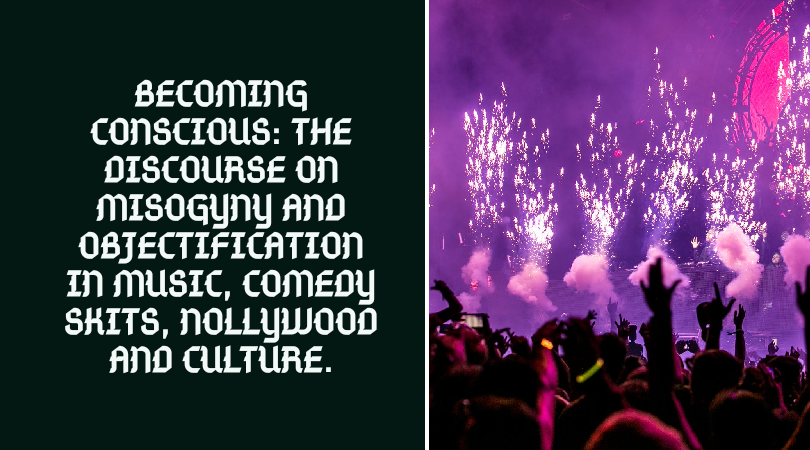 Becoming Conscious: The Discourse On Misogyny and Objectification in Music, Comedy Skits, Nollywood and Culture

Misogyny is the dislike of, contempt for, or ingrained prejudice against women. Need I say that a woman loved, is a generation loved.

As much as this is compared with anti-woman sexism or misandry, perhaps, it’s important to state clearly that women can hold misogynistic views.

Music, movies, comedy skits, online video gaming, these days cartoons and innocent conversations, build negative muscles for the purpose of new culture formation. Without a doubt, the listed can serve as a catalyst for social change and the right excuse for making destructive teachings cool.

It’s the 29th of May 2020 as I happen to go on to Apple Music Top 100 Nigeria song; a list formulated by the data provided from listenership. Did you guess the genre already? You’re right. … Afrobeats – ‘The general classification for contemporary African music which is mainly fusions of the original African music genres like Highlife, Hiplife, Makossa and others ‘ (Steemit).

Afrobeats in Nigeria and most of Africa arguably is the most consumed music genre, hence its vital role in shaping perspective which with some level of consistency may and would distort culture. If this wasn’t motivating enough to research the above subject of concern, what more will?

I touch each song lyrically, jotted a few notes on the Top 10 songs among the hundred most played and listened to. One out of the 10 songs, had a profound admiration for her unborn child, void of wrong contents while the remaining 9 songs applauded alcoholism, b*t*h usage, promotion of illicit influence and gangsterism, admission to crime, criminality even at the detriment of true love. Misplaced priorities champion the theme of some other songs; love gone wrong, unintentionally objectification of the woman and her likeness to a sex goddess – one particular singer gives a mental rendition of his sexual escapades with his female love interest, whilst using the d*ck word, p**sy word, allowing another singer the privilege of sentimental and confused attachment to loving a particular woman’s bodily endowment with a subtle and creative exhibition of toxic masculinity hence the merger of irresponsible rationality just to prove a point. A case of objectification, materialization, sex, toxic masculinity, pride, exacerbated ego, multiple sexual partners advocacy with beautifully coordinated instrumentation aiding and abating the crime to our minds and social justification of a culture fast raiding our manners and values, all because it’s pop – popular.

If our research was anything to go by, a larger percentage of songs, comedy skits, television and online contents consumed by our boys, objectify women, re-qualifying success’ definition, whilst making a joke of both hard and smart work. In recent times, the word smart work has become a bit daunting to define.

According to naijaloaded.com.ng‘s top 10 Nigerian Skit Makers, You Should Know listing, the least followership on the ranking as at the time of researching this, was at 601 thousand, while the highest, influences 4.5 million millennials. From the brilliantly produced and directed cinematographic narratives of irresponsible Sugar daddy’s unsolicited show of affluence to satiric rants and gender degradation; a large number of these skits though revealing creative intellectualism, are sauced with sexual and suggestive contents depicted with the availability of heavily endowed ladies exposing cleavages and body parts with either tightly fitted clothing or loose clothing at the chest lines. In respect of this observation, it is hard to imagine that boys and young men after viewing these contents wouldn’t repeat languages and scenarios as observed in their lives, that is, outside of and on Social Media which paves the way to the growing menace of pornography consumption and sexual harassment as it concerns the Internet of things.

Pop culture is a vibe, an amazing vibe at that – this amazement shouldn’t re-enforce how boys and men socialise to view women, and girls as objects, properties having a monetary tag and attention circle (as consideration of value may be based on access to usage).

We need not say that perception is a bedrock for Gender-Based Violence, Assault, a tiring hurdle to achieving Gender Equality as we prevent transgenerational derided manhood.

The definition of wealth in Music videos must of relevant importance, be re-evaluated. Manners maketh Men, and money is the exchange of good value regardless of society’s cultural shift. This is an advocacy for the best utilization of influence and creative pensiveness.

Raise your hand in solidarity of our collective need to turn a new leaf. Here are a few ways to help raise better men and re-evaluate the contents on our value boards.

First would be – do you know what your little men listen to?

* Begin a conversation with him or them.

* Ensure you’re open as it would enhance smooth communication and bond between you and your little man or men.

* Ask for their playlists, jokingly investigate a bit more if they like any trending music and what artist they rather to the other.

Second would be – share your creative collection. By this, I meant your music playlists, all-time favourite movies (please censor), comedy skits, and books, including artworks; just so you remember that a boy today would become a man tomorrow.

Third, this has got everything to do with you. Your turn (smiles). What are you listening to and watching?

If observation and influence remain vital traits of leadership, it is time to take action towards readjusting the narratives because your little girl, little man, teenager, and youth may subconsciously find you as their influence point (in local parlance: Plug).

At OMOKURIN, we are passionate about the transition of Boyhood into Manhood regardless of his background, creed, or abilities. We are raising better men for the individuals themselves, society, without leaving out the Female gender, her dreams, value, esteem, and future. We will help raise complete men – disciplined, drempterpreters with a soul for transgenerational transformation.

This is not a personality targeted advocacy, neither is it a pointer at the censorship board. All we are advocating for is that the prevalence of rascality, rape, substance abuse, wrong influence, and parenting of our focus group is most often as a result of intentional decisions made in the light of contents watched and listened to.

Becoming Conscious: The Discourse On Misogyny and Objectification in Music, Comedy Skits, Nollywood and Culture by Benjamin Sarumi

2 thoughts on “Becoming Conscious: The Discourse On Misogyny and Objectification in Music, Comedy Skits, Nollywood and Culture by Benjamin Sarumi”