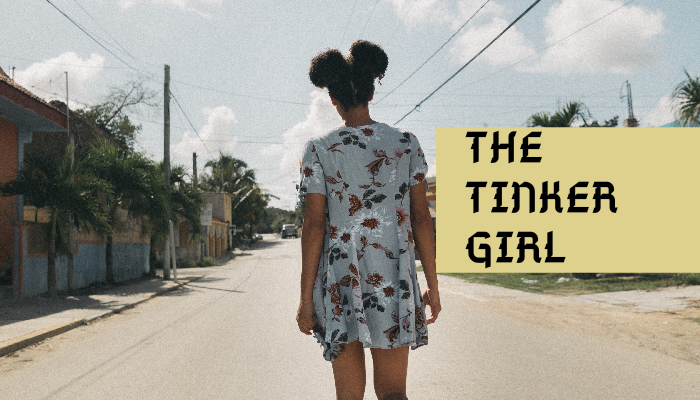 Swinging my bag and walking around the area, I couldn’t believe I had made it out. We used to sit out on the sand and admire those we saw on TV wearing green and white and marching. Today, I was one of them. I had finished school and I had been posted to somewhere to serve. We’d just finished the three weeks camp and I had returned home after years of staying away to tell my people that I had made it. After dropping my bags at home and showering, I had gone round to see my old acquaintances, friends, and the younger ones I’d left behind. My first stop was Aunty Pat’s tailoring shop. She was the one that sewed all my school dresses because I couldn’t afford to buy “ready-made”. As I neared her shop door, I could hear her scolding someone.

“You this girl! Why can’t you focus? What is wrong with you?” she yelled.

“You’re answering me back!” she yelled, “Children of nowadays! No respect! No manner!”

I walked in and cut short the exchange.

Franca, the girl that she was scolding looked up and instantly recognized me. She screamed.

Then she got up and threw herself at me. I hugged her.

Aunty Pat just rolled her eyes at me.

“So you have decided that we are now good enough for you! Because you went to university you refused to come home. Everyone was now wondering what was wrong with you!”

I rushed over and hugged her. She tensed and refused to hug me back but I could tell that she was super pleased and as excited to see me.

“I missed you too Aunty Pat. Can you believe that I even stopped wearing nice clothes because all the city clothes were jagara jagara?”

She relaxed and I could feel a smile spreading on her face.

“Thanks, Aunty Pat,” I said, releasing her.

I linked my arm in Franca’s and we left the shop together. Aunty Pat just bent her head and pretended like she didn’t see or hear us leave. We just walked around, chattered aimlessly, and greeted people I hadn’t seen for ages. Although Franca and I talked about a lot of unimportant things, there was a lot on my mind to ask her. I needed to ask why she had changed so much.

Of all the girls in our neighborhood, Franca was the one that intrigued me the most. While other girls played with dolls and loved to wear their mother’s wigs and pretend they were all grown up, Franca tinkered with spoilt toys and bits and pieces of machinery. She loved everything that had nuts, bolts, and screws. She was always hitting, twisting, turning, and trying to fix something. Sometimes, her little experiments were successful. One time, she fixed the shoemaker’s clock, repaired David’s toy bicycle, and unwound Lillie’s old doll. But at other times, she ended up making stuff a lot worse. My wristwatch wouldn’t piece back together after she tinkered with it.

I chuckled at the memory and she asked me what I was thinking of.

“My wristwatch. The one you tried to fix but ended up spoiling.”

She smiled but her gaze was distant. I think I saw tears trying to well up in her eyes.
“You weren’t even angry. I thought you were going to stop talking to me.”

“Never!” I said, “It’s just a watch. I know you meant well. Plus, you really loved trying to fix things. Whatever happened to that you? You never liked making dresses or carrying dolls.”

“Shortly after you left, many mothers started saying nasty things about me. They said, I was behaving like a boy and that No man would marry me. Someone even said, I won’t have children because I am just like a man. Tell me, Sandra, does anyone want to marry a woman man?”

I shook my head vigorously.

“How does trying to fix things make you a man Franca? Did you grow man parts while you were doing it? Or did your breasts and other lady parts disappear?”

Franca thought about it for a bit and said,

“Now that you’re asking me this, I’m wondering too. Like, there’s no correlation at all! Nothing about me changed o except that I was happy and passionate about what I was doing. Now, I’m trying so hard to learn how to sew but every time Aunty Pat is telling me where to cut all I’m thinking about is breaking open her machine and putting it together again!”

I threw my head back and laughed very loudly.

“Let her not hear you o. She will just break you open instead!”

Franca laughed too.
“You know, I studied Geology and not many girls studied it in my school. I think I’m even the only Geologist from this our neighborhood self. At Camp, I met a lot of other people that studied courses like that too. There was this lady that studied Civil Engineering. I met others that studied Architecture, Software Engineering, Building Technology, Forestry, Materials & Metallurgical Engineering, Petroleum engineering, and even one that studied something to do with Marine something. I’ve forgotten it. Some of them came from neighborhoods like ours and studied on scholarship. Some of them came from families that could afford their education. But the important thing is that they have that understanding that no course or profession is gender-specific and so they were able to convince their family and pursue their dream!”

Franca listened to me with rapt attention.

“I don’t want you to keep doing what you hate. You can’t be successful doing that. I know your parents are worried about you getting married but your fulfillment and happiness come before that. Yes, of course, you will marry. But it mustn’t be now na. Shey, you’re 17 this year. You still have a life ahead of you! Think about what you want to be and convince them.”

Franca nodded. Then, she hugged me.

“I’m really glad you came home, Sandra. God bless you. I’m going to pray, think carefully, and choose what I will study in school. Then, I’ll beg my parents to let me pursue my dreams. Kai! You’re now a big and wise woman o. I’ll be like you when I grow up!”

“No my dear Franca,” I replied, “You’ll be the best version of Yourself!”