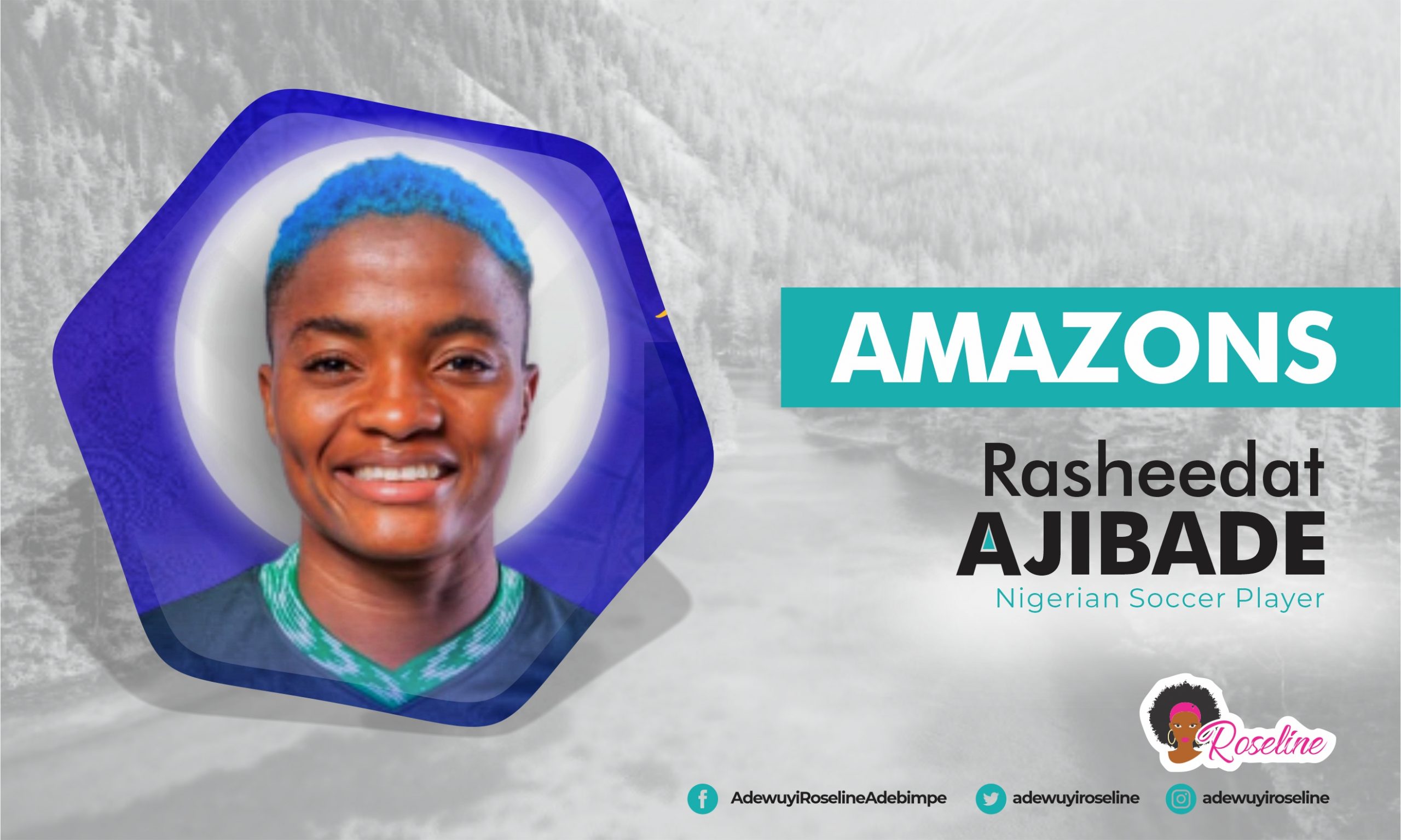 On the 6th of November, I hosted a Twitter chat with a Nigerian Soccer Player, Rasheedat Ajibade with the theme Kicking Through Football’s Glass Ceiling.

The aim of this is so that many young girls will see a young woman igniting her puissance to live her dream. We believe in the growth of female football. We know we still have quite a long way to go but we believe that every action we take is like a drop of water in the larger ocean of change. In the words of Rose Reilly, a former Scottish footballer in the 1970s, “The comparison from when I started playing football and the ladies’ football of today is like night and day”. The change might not be spontaneous but gradual and we look forward to a day when female football will be like the dawn of the day. This might not be for now but even for generations to come. We keep pushing. I believe that many young girls will be inspired by Rasheedat Ajibade’s story.

Rasheedat Ajibade is a Nigerian professional footballer who plays as a forward for Spanish Liga F club Atlético Madrid and the Nigeria women’s national team. She is nicknamed “RASH”, a shortened form of her first name, and is also called “The Girl With The Blue Hair”, an ode to her bright-blue hairstyle which she dons whenever she takes onto the field.

Ajibade represented Nigeria at age-grade competitions, before making her competitive debut for the senior team at the 2018 WAFU Cup in Côte d’Ivoire. In 2017, she was named first in a top 10 list of most promising young footballers on the African continent by Goal.com. (Culled from Wikipedia)

Hear from her directly:

I am Rasheedat Ajibade, aka RASH. A player for Atletico Madrid Feminino and the Super Falcons of Nigeria.

2. At what point did you decide to be a footballer and what was your motivation?

Did I start playing football at the age of about 6, 7, or 8 years old? Not quite sure when and I wouldn’t say there was so much motivation then, just a very young girl from the streets of Mushin, you know, just see a round letter object and start kicking.

I used to see boys on the street, and I joined them to play. And soon I just found out that there wasn’t so much difference between us. I could do perfectly what the boys were doing, and it was fun to do it.

That’s how I knew I wanted to be a footballer.

Sometimes they tell you football is a guy’s sport, it’s a men’s sport. It’s not a woman’s sport. When those kinds of words come in, it’s just, uh, one of those things that just make me feel a little somehow. But I was doing it better than they could do, so it in fact motivated me. Now, the discrimination is actually very low. I don’t think it’s so much of a big deal right now anymore.

4. What were the obstacles you faced as a girl child venturing into football and how did you surmount them?

For me, growing up there were a lot of obstacles and challenges, which varied from lack of support. You know, when you come from a poor home, you have to think of providing for yourself, buying sports gear, what to eat after training, education, and many other things

I was selling things in the market, doing house chores, and doing other odd jobs trying to support my family. It was really overwhelming then, but I am grateful to God for how far the journey has taken me now.

5. Do you think some adjustments should be made to accommodate the physiological makeup of female footballers?

I don’t know exactly because every girl is different even, and I don’t know how easy that will be.

Everything should be based on ability and humanity, not “If you don’t look like this or if you look like that.”

6. What would you advise to girls out there, trying to become footballers too?

Well, one of my biggest pieces of advice is just:

Love what you do. Have a passion for what you do. The first thing should be the love for the game, the passion that drives something inside you to keep going.

If you want to use some other factors like money as motivation, then it’s easy to get demotivated at the tough stages when the money is not there. And also, you have to be disciplined, be a disciplined player. Work as hard as you can and be as open as you can. Be humble. Be very prayerful.

7. Can you please share one each of your proud and trying moments?

My proud moment was with the Super Falcons, during the Nations Cup. Being able to score a goal to send Nigeria to the World Cup. To take my shirt off and declare Christ to the world and say thank you, Jesus.

I was really proud of myself at that moment.

Trying moments, I look at them as “Build-up moments”.

If I had to pick one, I would say the 2016 U20 World Cup when we were knocked out in the group stage.

8. You are very vocal about your faith, what informed that?

Yeah. I am very vocal and I will continue to be vocal.

I am not apologetic about it. I just pray for God’s grace to keep going. I can’t explain what informed it, but all I can just say is I will continue, I will continue as long as God gives me the grace to.

9. Where do you see yourself in the next five years?

In the next 5 years, I see myself as better, greater, more successful, happy, and more peaceful than in this present moment.

10. How do we think women can kick through football’s glass ceiling?

There should be good structures on the ground to develop women’s football, It needs to be an intentional effort.