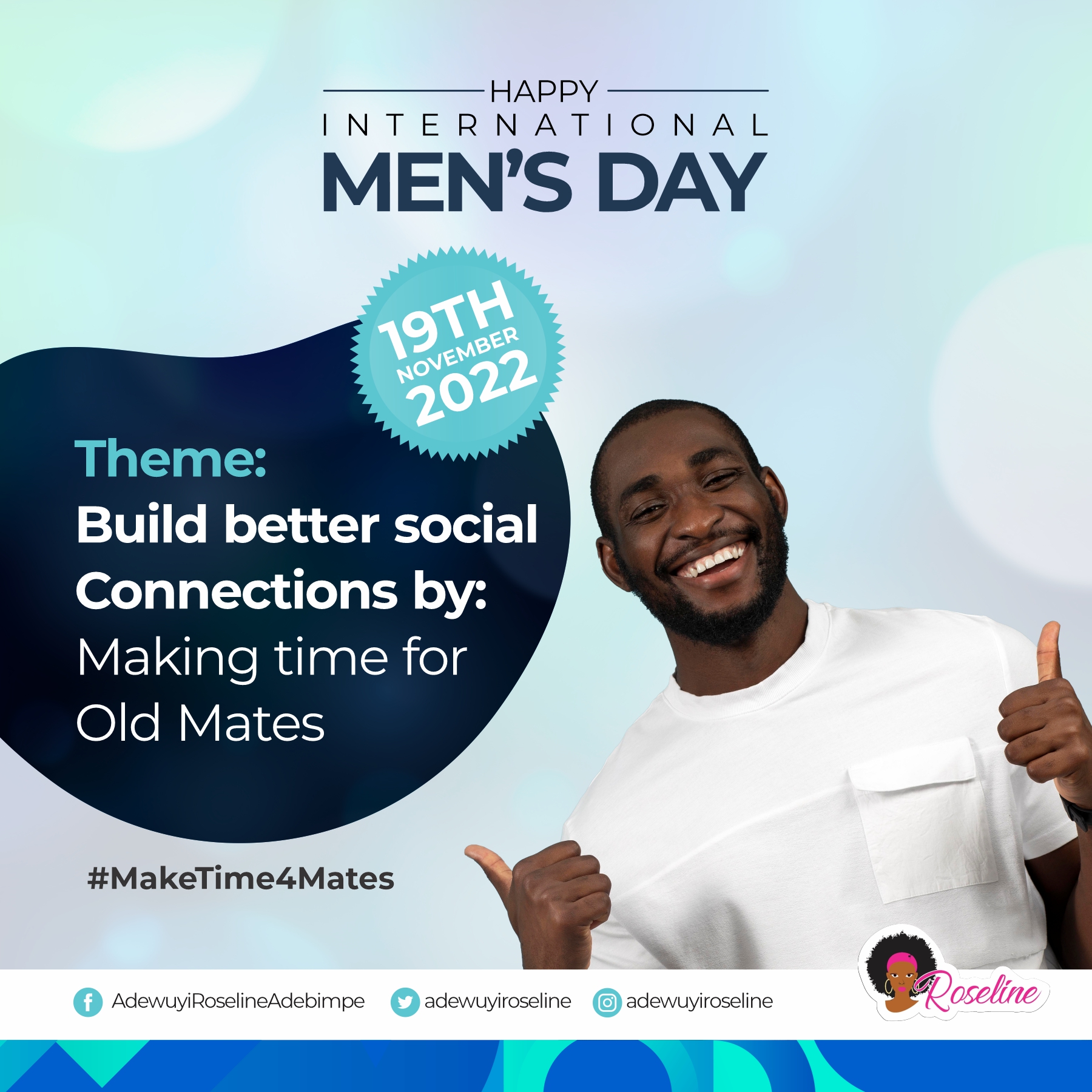 Recently, I stumbled upon this social media post: the writer said that men have laptops, wrist watches, cars, and phones but don’t have any friends, and if Siri and Alexa ever become robots, it’s game over. This post got me thinking, why are things this way? Little wonder this year’s International Men’s Day is theme is #MakeTime4Mates and build better social connections by Making time for old mates.

Why make time for old mates you may ask? Let me start by going down memory lane:

Growing up, I always admired the way boys bonded and believed that it is slightly different from the way girls did. I saw them come together and stand by each other. Like soldiers on a mission, nothing could tear them apart. They would fight and make up almost immediately. They would raise their voices over nearly everything they disagreed on but the next minute, they were shaking hands and eating together.

As we all got older, some things began to change. I noticed that most of my male friends and colleagues became a lot busier – thanks to the pressure society puts on them to perform. They rarely had time for each other. Sure, some made time to hang out over beer and laugh. But for many of them, it was a once-in-a-while thing. And those real conversations were missing as everyone was usually out to hail each other, laugh, and look cool during such hangouts. Plus, the alcohol didn’t help matters in most cases.

Speaking with many men around me, I realize that things need to change. More men need to build more social connections – not just because they want to get ahead in life or have fun for a few minutes but for the support a community brings. It is not okay to be alone and worldwide stats on suicide rates show us that our men need help. They need people in their corner whom they can turn to and share burdens with. They need those types of friends they had growing up – friends they could be real with, friends they can fight with and makeup with, friends that they can lean on when the going gets tough.

The unnecessary pressure and emphasis on the hustle culture need to stop, no doubt. But regardless, a solid support system will help men live better fulfilling lives. As someone who has a twin brother, daily, I see how much pressure he is under and I wish I could help. But I know that I won’t be able to help him as much as one who knows firsthand what he is going through. That is why I am lending my voice on this day’s International Men’s Day. I am urging men to make time for old mates. Those people you once had camaraderie with, seek them out and bond again. You can’t do life alone, as you always have. Can’t you see that you have reached breaking point too many times? It is not healthy if you keep going on like this.

For our voices to be heard, we need to make a loud sound. So, as we celebrate this year’s International Men’s Day, encourage the men in your life, share posts, write tweets, and make your voice heard. Let’s all echo the same sound across the universe – so that we will uphold, uplift, and preserve our men.