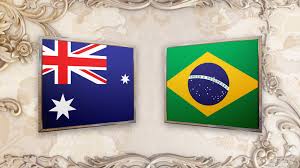 Two familiar foes will set out against each other again today at the Stade de la Mosson in Montpellier as we look forward to the latest chapter in a match up that can be viewed as a derby. This is incredibly the fourth successive FIFA Women’s World Cup in which Australia and Brazil have met, and of course their most memorable recent meeting was at the Women’s Olympic Football Tournament in Rio de Janeiro where hosts Brazil just about edged victory following a tense penalty shoot-out. Sadly, we won’t be afforded the luxury of another shoot-out in this particular encounter but it once again promises to serve uS no dull moment. This, after all is a contest between one of the most evenly matched teams in the competition.

The Maltidas will likely be more eager to win and earn their first points in the tournament after their shock injury time loss to Italy in their group opener but they will be weary of a very compact and experienced Brazilian side that could possibly have their star striker Marta back after she missed their first game. Not that they missed her though as strike partner Cristiane helped herself to a superb hat trick while becoming the oldest player ever to net a treble in the FIFA Women’s World Cup in the process.

Since Brazil’s triumph in Rio, the Maltidas have dominated the fixture, winning the past four matches and scoring a staggering 14 goals in the process. Brazil’s form going into the competition itself wouldn’t have given them much confidence but after ending a nine game losing streak against debutants Jamaica in their opener, they should be on a high. The problem though for Brazil’s aging legs is if their experience will be enough to contain an energetic Australian side.

Victory for Brazil will likely guarantee them a place in the knock out stages and put Australia at risk of an early shock exit from the competition but if the Maltidas were to come out victorious, it would leave the group finely poised with everything to play for going into the final match day where Brazil will take on Italy and Australia tackle newcomers Jamaica.

In the other match of the day, Banyana Banyana will be looking to bounce back from their opening defeat to Spain as they take on China who also suffered the same fate in their own opening match against tournament favorites Germany.