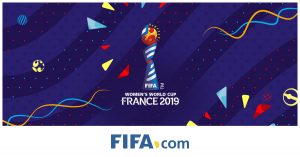 It’s France 2019, the 8th edition of the FIFA Women’s World Cup which is the biggest stage in the world when it comes to Female football. Female football doesn’t get as much coverage as the Male version and quite a number of people aren’t even aware of the tournament coming up this summer. This is why I have decided to bring it closer to people’s attention. Women play football too and very well at that!

It is 14 days countdown to the tournament. This summer’s competition will be kicking off on June 7th with the final game scheduled for 7th of July at the Parc Olympique Lyonnais, France’s largest capacity football stadium.  It will feature 24 teams divided into six groups and 52 matches in all.

Traditional heavyweights Germany and the United States Women National Team will be looking to continue their dominance while outsiders like England and Brazil will once again go in search of a maiden success in the event. The United States Women National Team are heavy and odds-on favorites to retain the title for the first time in their history after their triumph in the last edition while perennial favorites Germany will be looking to put recent disappointment in the competition behind them to return the top of Female football.

Host nation France will be harboring hopes of emulating their male counterparts by winning the competition on home soil and securing their first major international Trophy. The thought of one country holding both titles simultaneously and the prospect of doing so on home soil should be enough motivation. They have been placed in a relatively kind group with only Norway who will be without Ballon d’Or winner Ada Hegerberg (who retired from the National team in 2017 after being frustrated with the way women’s football was treated in Norway) likely to pose any serious threat to their dominance of the group A. South Korea and the Super Falcons of Nigeria complete the group.

Germany should have no problem topping Group B after being paired with fellow Europeans Spain as well as China and debutants South Africa. Nevertheless, football is a game of surprises, anything can happen.

Group C is one of the tightest with three main contenders. Australia, Brazil and Italy and newcomers Jamaica will slug it out in the group. The key game is likely to the Australia-Brazil game on 13th of June which could well decide who tops the group and their respective futures in the tournament.  Italy are back in the finals for the first time in 20 years and will be looking to do more than just to complete the numbers.

Group D is another exciting one with Auld rivals England and Scotland paired alongside Argentina and beaten finalists in the 2015 edition in Canada, Japan. Lioness Boss Phil Neville will be hoping to deliver the same kind of hope the male team gave English fans in Russia 2018 with chants of “…it’s coming home” becoming popular during the Three Lion’s run deep into the competition. This group appears on paper at least to be technically the most difficult group.

Group E features Canada, Cameroon, New Zealand and Netherlands. Netherlands made their debut in the tournament just four years ago where they also faced Canada and have since gone ahead to become European champions. They are rapidly growing side and will fancy their chances of winning the group.

In group F, the defending champions USWNT will face familiar foes in Sweden in a battle for supremacy on the last match day in the pool. The defending champions should be able to negotiate a fairly straightforward group successfully as they look to emulate Germany and retain the title for the first time in their history and Jill Ellis’ side are more than capable of winning a record 4th World Cup. Thailand and Chile, one of the four debutants in the competition complete the group.

The winner and runner-up of each group will automatically progress to the round of 16. The four third-places to accumulate the most points will also advance to the knockout stage along with the group winners and second-place finishers.

We look forward to a very exciting tournament with top-quality football from the ladies!