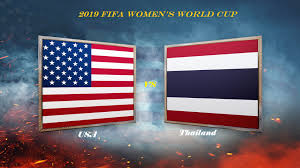 Talk about arriving late but fashionably so; The United States Women National Team will be brimming with confidence as they begin the defence of their title against lowly ranked Thailand. USWNT, the reigning champions and most successful team in FIFA Women’s World Cup history, begin their France 2019 campaign late on Tuesday.

Thailand is making its second ever appearance at the Women’s World Cup, after debuting at the last edition four years ago in Canada. They actually gave a good account of themselves in 2015, finishing third in Group B with three points (behind Germany and Norway). Their form coming into this game is terrible, however they have lost five in a row and 11 of their last 12. Thailand does feature a pair of players that are based in the US, both college soccer players: Suchawadee Nildhamrong of Cal and Tiffany Sornpao of Kennesaw State, the only members of the squad to ply their trade outside Thailand. Both players would need to be at their best to give Thailand any hope of going far in the tournament.

The roster that Jill Ellis brought to France is a very experienced roster (and the only one to be entirely domestically sourced) and by the standards of soccer, could be considered an old roster, or more appropriately an experienced one. They are expected to have too much for Thailand to handle and this should be a routine victory for the tournament favourites. The USWNT is currently in a very good run of form (not that they really ever aren’t), having won six in a row (the last four without allowing a goal) and having lost just once since July of 2017. The worst they have gone so far is to finish third place.

In the other contests of the day, Chile and New Zealand will be on the hunt for upsets of their own against Sweden and the Netherlands respectively. Looking forward to great football skills today.