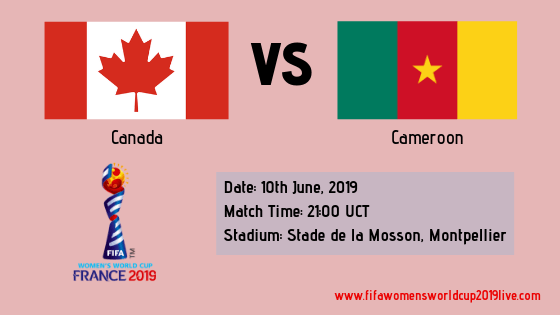 Canada, who are probably the least fancied of the favourites to win the tournament take on the last edition’s overachievers Cameroon in a tricky encounter.

Although Cameroon are ranked 46th in the world, the third lowest of those in the competition, but with the trio of Gabrielle Onguene, Ajara Nchout and Raissa Feudjio in their team, they would be looking to cause an upset.

In a quirk of fate, they will make their grand entrance at the FIFA Women’s World Cup France 2019 against the country in which they created their greatest national-team memories: Canada. They are a strong side and we respect them, said Nchout, a forward who, rather curiously, wears the No3 jersey but football is not an exact science on the pitch, anything can happen. We have prepared well for this match and for the World Cup as a whole. At Canada 2015, Cameroon’s first appearance on women’s football’s greatest stage, they succeeded in reaching the Round of 16, and the influential trio played an important part in that unexpected success. Four years down the line, their increase in acumen has enabled them to set loftier targets.

Canada will still go into the match as overwhelming favourites and will be looking to score as many goals against a team which should be their easiest, at least on paper as the difference between first and second place might eventually come down to goal difference with New Zealand and Netherlands the other teams in the group. We are looking forward to an exciting match between these two countries meeting for the first time in the World Cup.

Japan and Argentina will also be playing today and predictions seem to be in favour of Japan, the runner up of 2015 Women;s world cup. As I always say, football is a  game of surprise, there might just be a match full of scintillating and dissimilar experience. Bring it on. 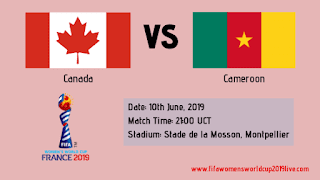