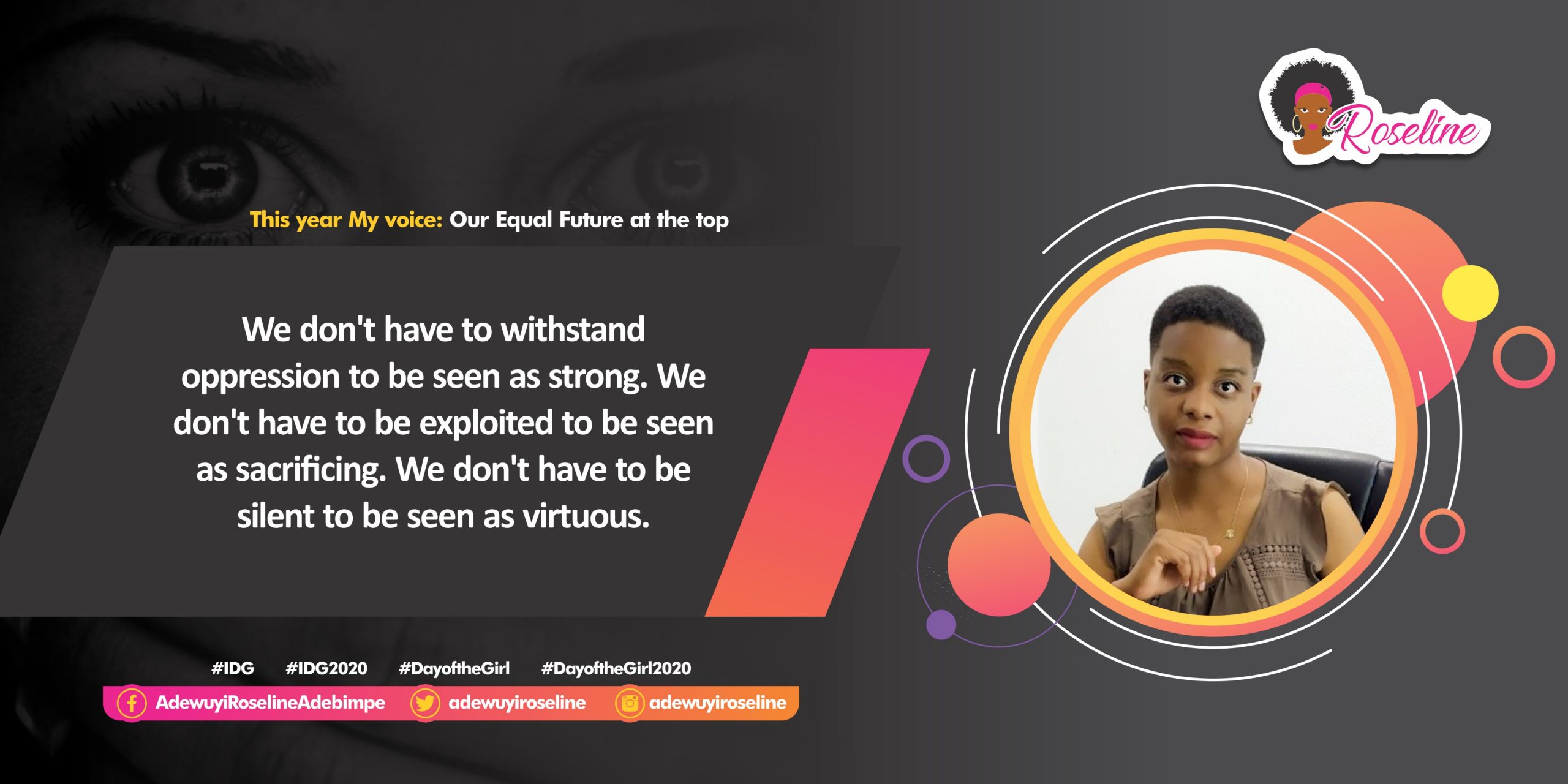 roselineOctober 11, 2020EventsDayoftheGirl, DayoftheGirl2020, IDG, iDG2020No Comments on International Day of the Girl Child 2020 -Words on Marble – Letter to A Young Girl
It is the International Day of the Girl and this year’s theme is My voice, Our equal future.
For years, society has upheld the culture of silence. They have said time and time again that you should be seen and not heard. They question why you would dare speak back to a boy. They frown when you raise your hand in class. They hiss when you question agelong traditions and hit their head in wonder when you say you have an opinion. They tag you a rebel – a person everyone should be wary of. They expect you to be accepting of everything they throw at you. And they measure your goodness by how much you are willing to shut up and suck up the pain, the hurts and the second-class treatments.
For centuries, their goal has been to make you powerless. Their mission has been to lie and hide behind their prejudices to make you feel like you should have no place or say here. They used whatever weapons they forged and threw hard words at you to make you feel like you don’t deserve to be here. You don’t deserve to breathe the same air boys do. Or attend the same school boys do. Or work at the same job boys do. For a while, they succeeded. They shoved us so hard that we did not speak. We shed our tears at home and put up a façade whenever we went outside. We smiled, sat still, looked pretty and did as we were told but all we wanted was to speak up and tear all the glass ceilings down.
Soon, we started rebelling. We decided that we had had enough.
“Why do we have lips if we didn’t need to speak?” we cried.
Frustrated and angry, we rose and took to the streets. We talked about anything and everything. We talked about ourselves, how we felt and what we deserved. We talked about: The right to equality. we needed to be seen as equal in value to men. We talked about the right to be seen as adults who were capable of making our own decisions. We talked about the right to owning, controlling and making decisions about our own bodies. We talked about the right to vote. The right to go to school. The right to be protected by laws. Basically, we talked about the right to be seen as humans just like men are. It was shocking at first, to see women get up and talk but before long, the world started getting used to it. We made them realize that we knew we had a voice and we were willing to use it!
A lot has changed since then but the struggle still remains because there are people who want to stifle our voices by telling us to cower in shame. They shut us up when we are hurt and blame us when we are violated. They make decisions for us and expect us to follow them without questions. They shame us when we want to talk about our bodies. They make us feel second place when we say we have an opinion and treat us like we were an afterthought of creation. But we won’t back down now.
The more I think of these things, the more I realize why they try to shut us up. They ask us not to speak because they know our words are powerful. They ask us to keep it quiet because they know that when we speak, it reverberates throughout the entire universe sending ripples across the galaxies. They know that when we end the culture of silence, we are able to demand justice and enforce our rights. They know that we are able to contribute meaningfully to our environment and effect positive change.
So, what’s stopping you? What’s holding you back? Can’t you see? You are the key to the change you seek! Enough of the silence. Enough of the shame. Enough of the hiding behind the scenes. Step out into your rightful glory and stop hiding behind the identity they have given you. Stop hiding behind their lies! Speak up! Use your voice. Let the sound of your vocal cords reverberate across different timelines and countless generations. Be loud. Be heard. Be known for what you believe in. Say what you think. Talk! You have a place here. You were made to rule here. You were born to be here and you deserve to be given a shot. So, speak because when you do, you help create the equality we all deserve.