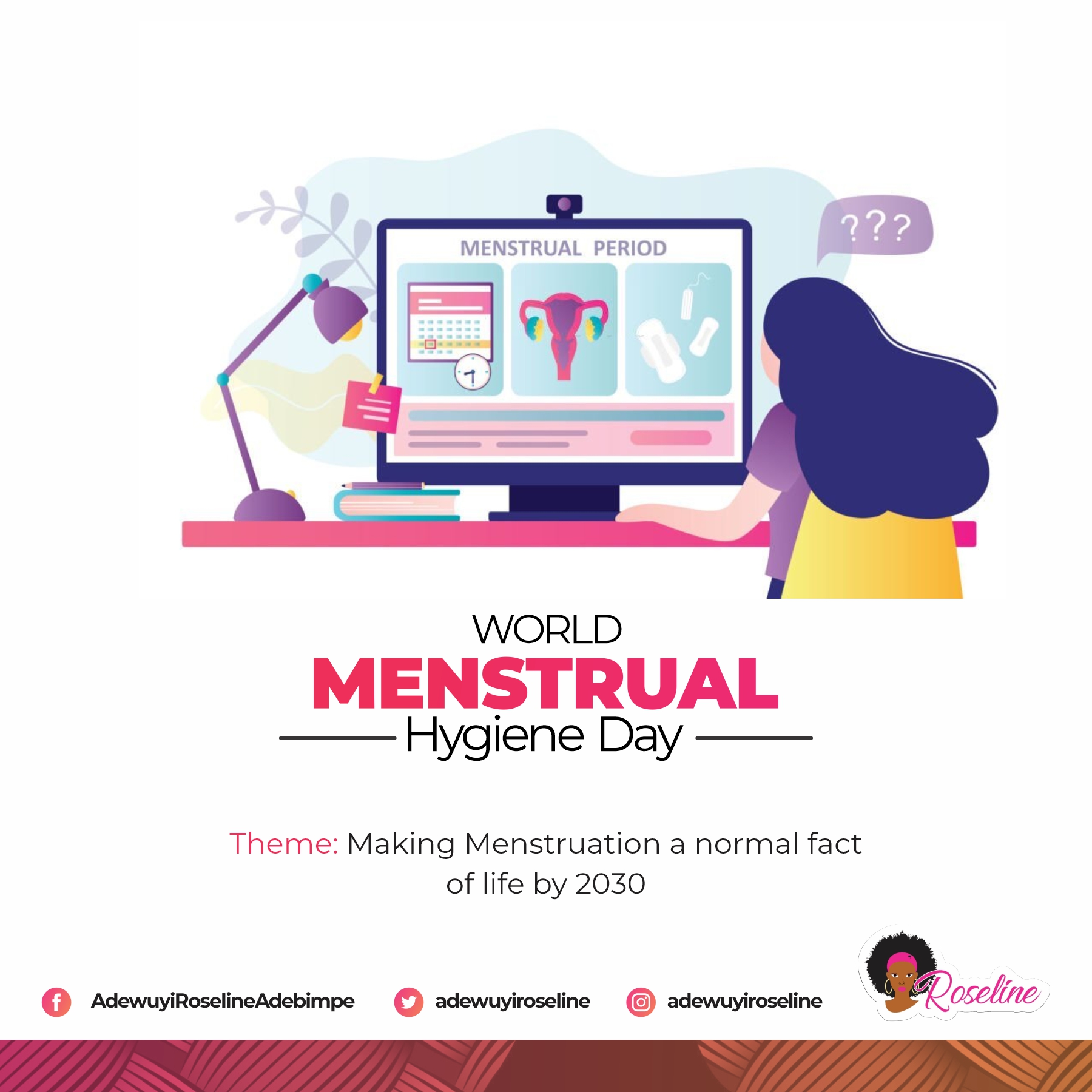 Making menstruation a normal fact of life by 2030

Imelda rolled to a fetal position as the pain in her abdomen increased. She clutched her stomach and stifled a groan. She lazied out of bed to get her hot water bottle.

As she turned on the light, she noticed a pimple break out on her left thigh. Her body vibrated with panic, she dashed to the bathroom and splashed water on her thigh, and began massaging in hopes of them disappearing. ‘Just go away.’ She mumbled. The pimples remained. She burst into tears and sat on the covered toilet bowl. ‘I wish you were here, I don’t know what is happening to me. I feel like I am going to be sick like you mom.’

Imelda lost her mom when she was four and since then, it had been just her and her dad. She had yet to tell her dad about the recent happenings in her body because she did not want to alarm him.

Mr. Frank switched off the television and went upstairs, as he passed by Imelda’s room, he noticed the light was still switched on so he knocked at the door, ‘it’s past your bedtime, you have school tomorrow.’ He announced.

Mr. Frank knocked again and when he heard no response, he opened the door. He found her seated on the toilet bowl sobbing. Immediately she looked up, she wiped her eyes. ‘Daddy, I was just…’

‘Why are you crying dear?’ He asked.

She shook her head, ‘I miss mommy.’ She replied.

Mr. Frank pulled her up from the toilet bowl and led her to the room. ‘I will tell you a bedtime story about mom.’ Imelda smiled and at moment the pain and fear that coursed through her halted.

Imelda placed her head on the table at the cafeteria during lunchtime. Modupe handed her a cupcake, ‘it’s my brother’s birthday.’ Modupe smiled. ‘The party is this weekend and you are invited.’ Imelda was about to take it when she felt a blunt pain in her lower stomach. She gritted her teeth and shook her head. ‘Thanks, but I’ll pass.’

‘Are you still feeling sick?’

‘Yes.’ She replied. ‘I had to force myself to come to school because of the Maths test.’

Modupe patted Imelda’s back and placed the cupcake back inside the box. As soon as she started eating, Imelda stood. ‘I will be at the sickbay.’ She said. Immediately she stood, a sea of murmurs broke out. Imelda took guarded steps, wondering what was responsible for the murmurs. She thought to herself. Is my zip bad? She ran her hand through it and heaved a sigh of relief. It is not the zip, then what?

‘Imelda is leaking like a pot of spoilt stew.’ Abel yelled, contorting his face and pointing at Imelda.

‘Yuck! So disgusting. It just had to be in the cafeteria of all places.’ Tobi a boy seated beside Abel snorted. ‘My food is polluted.’

The cafeteria became noisy with laughter and giggles. Imelda examined her grey skirt and saw the bloodstain. She hid her face in her palms and scurried to the door.

Modupe rushed after her and handed Imelda her sweater. ‘Welcome to the club.’ She squealed in excitement…

‘Why are you happy over my humiliation?’

‘You should not be humiliated over a normal occurrence in your body. It is as normal as the air we breathe, so own it. I’ve always thought Abel was a dumbo and today, he made that clear.’

‘You bleed too?’ Imelda asked. ‘I thought I was sick.’

Modupe nodded, ‘Every woman does. It’s officially two months since I saw my first period.’

‘I had no idea. Maybe if mom was here she would have prepared me.’

Modupe hugged her, ‘I know but I am sure your dad will have some answers too. And you can always spend your next period at my house and we can have the baby girl treatment.’

‘Thank you so much. I think he tried to tell me many times before but didn’t know how to start. So, I’m going to ask him today. Thank you.”

Arm in arm, they went to the nurse to get some pads and pain killers.

At the cafeteria, minutes after the giggles died down, Daniel nudged Abel, ‘Why did you humiliate Imelda? Couldn’t you see how uncomfortable she already was? Don’t you have a mom or a sister?’ He asked. ‘You are so stupid. How do you think women have children? ‘

‘Whatever.’ Abel replied, shrugging. ‘But I heard period blood is dirty blood.’

‘You are silly. It is a pity I can’t help your ignorance.’ Daniel resumed eating and Tobi pinched his nose in disgust.

Farida shook her head as she listened to their conversation. She resisted the urge to drag Abel and Tobi by the ear and force them to apologize to Imelda but she had bigger fish to fry.

She waved at Daniel as she passed their table on her way to the principal’s office.

‘How are you doing Farida?’ Mr. Reginald asked.

‘I am fine, I wanted to discuss something that just happened at the cafeteria.’

Mr. Reginald looked up and removed his glasses. ‘I am all ears.’

Farida narrated what happened with Imelda, and Mr. Reginald furrowed his brows. She had not even finished narrating when he yelled. ‘Get me, Abel and Tobi, I will make them scapegoats to serve as a deterrent to other students.’

‘No sir.’ She shook her head. ‘I think educating the whole school that menstruation is a normal occurrence in women and girls and not some disease will yield better results.’

Mr. Reginald nodded, ‘Amazing, that is a wonderful idea. We can organize a seminar. The school nurse will anchor it.’

*****
Menstruation is a natural and healthy occurrence for many young girls and women around the world. Menstruation occurs monthly in most women and girls for about 2 to 7 days. It is an important aspect of reproduction as the menstrual cycle prepares the body for pregnancy.

According to UNICEF, around half of the female population (in the world) is of reproductive age. As important as menstruation is in reproduction, it is still stigmatized all over the world. It is treated like a disease and most girls and boys are denied the opportunity to learn about it. It is appalling that women and girls have been denied the right to learn about their bodies. Boys and men are taught to be repulsed by it and girls and women are taught to be ashamed of it.

But menstruation could perhaps be likened to metamorphosis which is normal and essential. Who would see a caterpillar bloom into a butterfly and frown in disgust? Obviously an ignorant person. Sadly, gender inequality and toxic customs/traditions are common reasons for stigmatization against menstruation. This negatively impacts the quality of life of women and girls. It makes them keep silent when they’re on their period or experiencing complications. It also denies girls and women access to quality sanitary materials like pads and tampons.

We need to destigmatize menstruation because it is a normal aspect of life. Girls and women have the right to be free from discrimination about something that makes life continue. They have to stop feeling like they should be silent or hide when they are on their periods.

Let’s destigmatize menstruation. The way we can do that is to start talking about menstruation it in our offices, schools, markets, bus parks, etc. Let’s demystify it and stop talking about in hush hush tones like it’s something to be ashamed of. Menstruation is not a crime. I’m challenging you today to make the change. Making menstruation normal by 2030 begins with you.