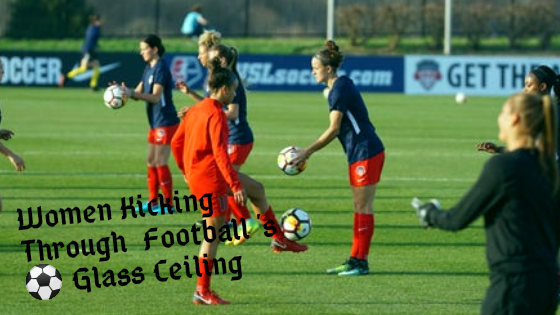 It is 21 days countdown to Female World Cup but the hype is quite down. The answer is not far-fetched. This is female soccer usually under-valued, under-funded and under the radar. I saw Germany’s Women’s World Cup Advert https://tinyurl.com/y5nrmzmk

online on women players and it further resonated my concerns. Here are the words;
‘Do you know my name?
How about mine?
Didn’t think so.
We play for a nation that doesn’t even know our names.
But do you know we have been European champions three times, right?
No? that’s because it was eight times.
For our first title, we were given a tea set.
Since we have started, we haven’t just fought against opponents.
We fought against prejudice.
‘Women are there just to have babies’
‘They belong in the laundry room’
‘It’s like watching amateurs, in slow motion’
But you know what…..
We don’t have balls, but we know how to use them
We are the ones with make up on our faces
We like to wear high heels and knee-high socks. Yeah.
We like to dance.
We’re into people that know what they want.
And when it comes to role models,
We just like to look in the mirror
Don’t worry, you don’t need to remember our faces.
You just need to know what we want.
We want to play our game to our own beat’

I hope our local and international media will do better this time.

I love football and I will be sharing some updates about this world tournament I am really looking forward to this tournament that will span through 7th of June to 7th of July. I am particularly rooting for the African continent; Nigeria, Cameroon and South Africa.

The FIFA World Cup will be taking place in France and the matches will be held in 9 stadiums : Parc des Princes in Paris, Allianz Riviera in Nice, Stade de la Mosson in Montpellier, Roazhon Park in Rennes, Stade Oceane in Le Havre, Stade du Hainaut in Valenciennes and Stade Auguste-Delaune in Reimes, Stade des Aples in Grenoble, and Stade de Lyon in Lyon.. Find here groupings for the tournament;
GROUP A
France
Korea Republic
Norway
Nigeria

The Female World Cup has been played seven times and United States has won three times and they keep appearing in every tournament while Germany won consecutively in 2003 and 2007. No African nation has made it to the final. Nigeria made it to quarter final in 1991. So far so good, only four (4) countries have won the Women’s World Cup, United States, Norway, Germany and Japan. Top teams through the years are United States, Germany, Norway, Japan, Sweden, Brazil, China PR, England, Canada and France.

There is going to be fifty-two (52) matches in all. It is also interesting to note that this will be the first time VAR (Video Assistant Referee) will be used in the Female World Cup.

Marta Vieira da Silva of Brazil is the all-time leading scorer of the world cup. Birgit Printz from Germany comes second. So far, so good, there have been 771 goals in all.

In this year FIFA Football Awards, which will be held in September in Milan, new awards for women were awarded to the category which are The Best FIFA Women’s Goalkeeper and FIFA FIFPro Women’s World11. This new development was said by Zvonimir Boban, FIFA’s Deputy Secretary General which aims at raising the profile of women’s football.

I am looking forward to more women kicking through the glass ceiling of world soccer. I enjoin everyone to support them.We are individuals! We have ambitions! We have drive! We have passion! We play hard! We win hard too! We put in our best in our sports and games as much as our men do! We just need you to see it. We need you to recognize it. We need you to appreciate it. We need to encourage it.

This is a call to women out there. Female footballers, up your game. Support women who play. Watch our matches. Talk about them. Tweet it. Post it on Facebook. Share it on Instagram and Discuss it on WhatsApp. Media industry, do better. Let the world know that something is going on. Let the world know the Female World Cup is coming up In June, 2019. And you’re cheering massively for us! We promise to play our hearts and give you a good game! Just let us know you will be there. Let us know you will be watching. And you will tell a friend.
Support Super Falcons! Support Female Football today!! Valorize female football!!!