The final round of group matches continues tomorrow in group C with Italy taking on Brazil and Jamaica locking horns with Australia. Italy may have already secured their place in the next round, but their final Group C encounter with Brazil in Valenciennes still promises to be an intriguing clash as the Seleção will also be harboring hopes of advancing to the knock-out rounds. The Seleção will need to better Australia’s result against Jamaica to guarantee they remain in the competition, no small challenge given Italy’s sparkling form in the tournament till date. Having reached the World Cup for the first time in 20 years, Italy have been one of the most surprising teams in France this summer, notching wins over Jamaica and Australia to sit comfortably atop the table going into the final round of group matches.

Italy’s will be looking for a third win in a row against Brazil after Cristiana Girelli scored a first half hat-trick whilst Aurora Galli notched a brace of her own as the Italians proved far too good for the Reggae Girlz in the 5-0 victory last time out.

A point against Brazil will be enough for the Italians to progress as group winners but with qualification to the knockout stages already secured, they may look to rotate to keep their side fresh with Galli pushing for a start after her two-goal cameo.

Brazil threw away a two-goal lead against Australia to leave them needing a result in their final Group C match against Italy to ensure they progress to the knockout stages of the Women’s World Cup. The Brazilians opened the scoring from the penalty spot with Marta slotting home before Cristiane followed her hat-trick in the opening game against Jamaica with her fourth of the tournament before Australia hit back to claim a 3-2 win.

Marta continued her impressive scoring record in Women’s World Cup matches with her 16th goal in the game against Australia but she is a doubt for this crucial contest after picking up a knock in that game which was saw her fail to appear for the second half.

Brazil were on their way to qualifying for the last 16 of the Women’s World Cup but after throwing away the two-goal lead, and they must now take at least a point from their final Group C match against Italy to ensure they progress to the knockout stages. Italy will make it tough for them having earned two wins from two so far and have already secured their qualification but they will be keen to continue their fine form.

Italy’s coach, Milena Bertolini has been excellent thus far, deploying her side in a simple and fluid 4-4-2 formation, constantly shifting her players around in order to exploit opposition weaknesses in each fixture. With superior positioning at both ends of the field, Bertolini’s players maintained a compact defensive shape that denied Jamaica time and space in central areas, constantly forcing them out wide before pressing and winning back possession. This might prove an effective tactic against an aging Brazil side that might not be able to keep up with Italy’s pressing and intensity.

The Selecao on the other hand went for a 4-5-1 system last time out, but somehow lacked the width to deal with Australia in wide areas and they also displayed a shocking inability to cope with crosses into the box. Marta’s failure to track back if she makes the line-up may allow Italy’s full-back to carry the ball forward unopposed which in turn may drag other Brazil players out of position throughout the game. The tendency of Brazil’s backline to constantly sit deep, which only adds to their problems, will be one of coach Vadão’s puzzles to solve.

In the other match of the day, Australia should have no problem seeing off Jamaica as they look to ensure qualification themselves. Victory against the Reggae Girls gives them the best chance of advancing from the group. 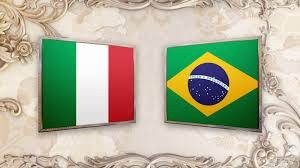