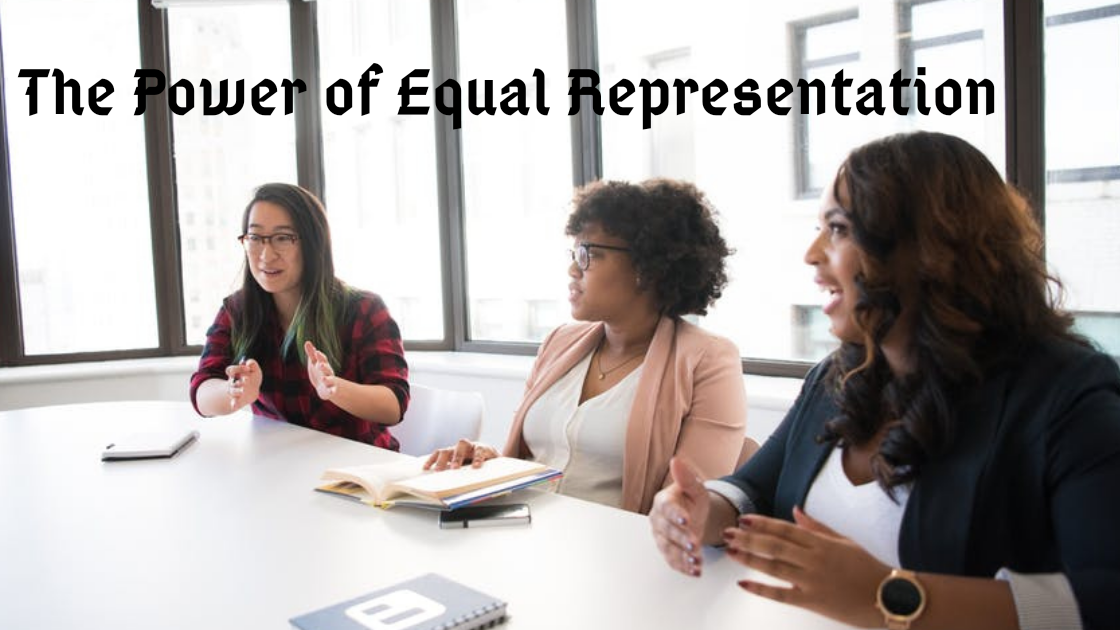 THE POWER OF EQUAL REPRESENTATION

Imagine attending a meeting with another firm only to discover all the representatives of such a firm are males. As a 21st-century human, it should get you thinking: “Is it that they don’t have women in this organization?” I have had a series of discussions with people regarding this and many people say that of course they would love more women on board but not at the detriment of competence. I understand correctly. I always reply that I am not a fan of incompetence or mediocrity. Still, I have observed that many times, people organize programs without female speakers or facilitators. It makes one wonder if there are no competent females in the whole of that city to handle those topics.

I firmly believe that competence is vital. But I feel that, sometimes, many of us assume that men would be more competent by default. Hence, we fail to consider checking if there are females who are better suited for a particular role. That is a huge problem. I have been privileged to attend programs organized by very competent women. I have seen a good number of them smoothly facilitate these meetings. I must confess that I do admire them. Their level of confidence, competence, and expert knowledge is impressive. When they talk, I stan. Imagine if they were never given the opportunity from the get-go to chair, facilitate or participate in events or programs. I don’t think they would be as good as they are now. Competence is not something that drops on one’s lap magically. It is built over time as one faces situations over the years, learns, relearns and unlearns. This is why we must be intentional about giving women deserved opportunities.

Most times, one’s competence level is tied to one’s level of exposure. Hence, a male who boasts of quality exposure may be more competent than a female, and vice versa. By said exposure, I mean opportunities either of them was given or utilized from their childhood to date.

Here is an example I always like to use: Imagine a boy A and a girl B of the same age just starting out in life. Both of them have been allowed to occupy leadership roles right from primary school. Things take a different turn at the higher institution, however. Because of our societal constructs, we automatically rate boy A over girl B. He is allowed to become the President of the Student Union, but the lady is shunned. Later in life, by default, she would realize that she has missed out on some opportunities because of the whole gender factor. Hence, automatically the guy appears to be more competent and more qualified than she (is). Of course, I will not advise a firm to hire an unqualified candidate. But the problem was not that the girl would not have been competent if she was given a chance. In most cases, we never get to find out because of those opportunities she lost stereotype factors. In all, I preach the need to give ladies a chance as they grow in life so that they will be qualified to be highly competent for more prominent roles.

As individuals and organizations, we should be intentional about gender balance. If you are organizing a program, hammer on inviting female speakers or facilitators. I remember one time that we organized a seminar, and I wanted us to ask a female to address the gathering. People claimed that women didn’t really venture into that area of study. But I insisted and luckily, we didn’t have to look too hard or search for too long.
What’s more, we even got two highly competent speakers who were well acquainted with their field of study. I was impressed and also encouraged.

Finally, I believe that we women shouldn’t just sit around moping, and wait to be offered an opportunity. A woman should develop herself before she puts herself out there. She should attend programs, apply for and attend fellowships; she should take the initiative and gain exposure in any way she can.
There’s a famous saying that if they don’t offer you a seat at the table, you bring your seat to the table. These days, we need to shed light on our skills and our areas of competency. Thank God for social media platforms and for media houses that do their best to recognize people doing remarkably well in different fields of endeavours. Thank God for initiatives where you can volunteer and use your knowledge to make a difference in society. As you put yourself out there as much as you can, you are giving yourself a chance to learn, unlearn and become more productive and competent at what you do.

For gender balance to be achieved, all hands must be on deck. As women work hard to build competence, we should stop hindering them. Instead, we should encourage them and give them equal opportunities as they climb higher up educational and career ladders. We should also be deliberate about choosing women to represent our companies or facilitate our programs. It would make our women more confident and competent. Their success would also inspire young girls to work hard towards the pursuit of their goals and dreams and get to that leadership position too.

PS: My painting of the scenario between a boy and girl here does not mean that I am advocating women competing with men or taking over everything. Heaven knows that is not my belief in any way! I’m all for both male and female complementing each other and co-existing together in unity!

The Power of Equal Representation

2 thoughts on “The Power of Equal Representation”