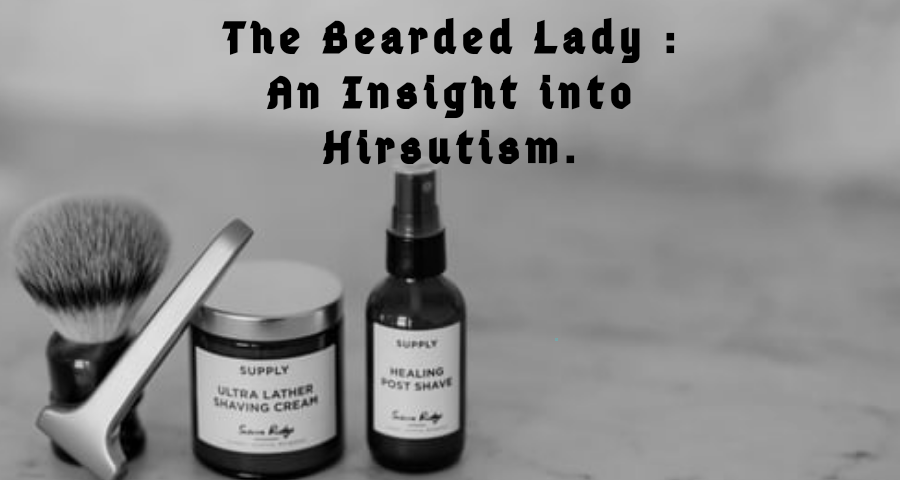 The Bearded Lady; An insight into Hirsutism
“Witch!”

“You should have just had a flat chest and scraped your hair to complete the look.”

“Should have? Abi she already has a flat chest and so she just needs to scrape.”

Maureen held her head high and sashayed down the street as the mumbled insults from different corners of the busy area whizzed past her ear from all directions. Smiling, she walked on undeterred. She had learned that people would never understand that she didn’t choose to be this way. She had also come to appreciate her a different kind of beauty and didn’t mind who didn’t. But she wasn’t always this confident. Right from when the first strand showed under her chin, she realized that people could be mean. They looked at her in a funny way like she had two heads or an animal head instead of a girl’s. Then, they often wondered if a girl with so much hair would ever get married. They teased and taunted her at every chance they could get. Back then in senior secondary school, she would run with her hands holding her ears tightly, tears rolling down her cheeks and her little round leather school bag swinging back and forth rhythmically like a giant pendulum strapped securely on her back. She had this experience nearly every day.

It took years for her to own her appearance. After making sure her beards and chest hair were not because of an underlying illness, her mother sat her down and told her a few things about beauty, self-worth, and acceptance. She made Maureen realize that whoever thought she was ugly just because she had more hair than other women didn’t have an opinion worth listening to. From that day, Maureen accepted her hairs and her unique beauty. She started holding her head high and walking like she was the most beautiful being on the planet and indeed she was for even the little strands under her chin complimented her perfectly shaped pretty brown face.

Mammals being the most advanced class of creatures with spinal cord in the Animal kingdom are characterized by the presence of mammary glands, a distinct region of the brain, three middle ear bones as well as fur or hair. Hair generally serves mammals different functions ranging from thermal regulation and camouflage for many animals; to provision of signals to other animals such as warnings, mating, or other communicative displays; and for some animals’ hair provides defensive functions and, rarely, even offensive protection. Hair also has a sensory function, extending the sense of touch beyond the surface of the skin. Guard hairs give warnings that may trigger a recoiling reaction. While Homo sapiens have developed an array of devices and methods to keep it warm, its hair continues to serve very important thermoregulatory functions.

As we have already established, all humans have hair, slight variations exist though particularly in characteristics and distribution among the sexes. Men characteristically have hair in what is described in the androgenic pattern; having facial hair around the chin (beards) and upper lips (mustache) as well as on their chest and abdomen. This pattern of hair is typically and usually absent in ladies.
Ladies who develop this pattern of male hair growth have often and for a long period of time been subjects of interest, legends, ridicule or in more modish parlance, body shaming. Such women have historically been referred to witches and on other occasions, their true sex has been questioned as famously depicted by Shakespeare in one of his works Macbeth:
“…you should be Women,
And yet your beards forbid me to interpret,
That you are so.”
It is disheartening that many women are taunted and jeered for something they have no control over. The medical term for the condition is Hirsutism; which is defined as an abnormal growth of hair following the male pattern in females.
Hirsutism in some cases can be due to hereditary reasons without anything medically being wrong with the woman, most times however, it could be an indicator of an underlying health problem in which case it is usually the result of a fairly common condition: polycystic ovary syndrome (PCOS), which causes excess testosterone and thus results in male pattern hair growth, among other symptoms. In some other cases, female beard growth is the result of some other form of hormonal imbalance (usually androgen excess) for example due to Cushing’s syndrome or tumors of the adrenal gland. The use of some medications can also result in this pattern of hair growth.

Thankfully, for women who experience this problem, there are ways to overcome it and get their confidence back. One measure that has been shown to help is weight loss; if you’re overweight and drop pounds, your body should make fewer male hormones, so you should grow less hair on your face or body. Obviously, another method to get rid of the hair is to actually get rid of the hair; Shaving, Tweezing or threading can get the job done depending on preference and suitability. Waxing is another effective method to remove unwanted hair. Depilatory creams and other more advanced methods like electrolysis and laser hair removal are also available.

Doctors can also prescribe medications that change the way your body grows hair, the only drawback here though is that the hair could grow back once you stop the meds.

So, to ladies out there who feel ashamed of those strands of hair on your chest or chin, it is important to get yourself checked by a professional to rule out any medical problem. Once that is done, you can boldly carry your hair with the entire swagger you can summon like the bearded lady or simply get rid of them if you choose to. No one should make you feel debased simply because of something that’s not your creation.

The Bearded Lady; An insight into Hirsutism