roselineMay 4, 2019August 23, 2019Lifestyle2 Comments on STEREOTYPES AND HOW THEY COLOUR OUR PERCEPTIONS

Franca sat on the floor, legs entangled like a yoga instructor.  “Why did she have to be the one to do all the work for them while they had hands and were all given the same assignments in school?” she thought, peeling cocoyam and hissing when the heat scalded her soft palms.

“This isn’t right,” She grumbled, looking at the books on the bed and the pile of dirty clothes just peeping at her from under the bed: Baggy jeans, hoodies, tee-shirts – Clothes that were not hers. .

She bit her lip and continued peeling the cocoyam, blowing her hands and trying to do each piece a little faster than the last. When she finished removing the backs of the cocoyam and tossing them in the bowl, she poured the hot soft soggy sticky balls into her mortar, lifted the pestle and started pounding hard. She had to finish and start reading before three hours’ time.

Earlier in the week, the guys in her lodge had brought out their clothes and foodstuffs and practically bullied her into accepting that she would cook and wash for them. Although her weekend was fully booked with schoolwork, she reluctantly agreed because her mother said you shouldn’t argue with men. You could bruise their egos and bring out the beasts in them.

“But I haven’t even started working on my assignments,” she’d wailed to Monica, her best friend, later that evening, “And you know how many pages that mean woman told us to write!”

“I know dear, I know. But why not tell them to do it for you? They’re much smarter than us anyway. Same way, cooking comes to us naturally,” Monica had replied, putting an arm around and trying to pacify her best friend.

“I wish I could do that,” Franca replied, “But I can’t. I really love learning this, you know. You know I do. Plus, I even scored higher than most of the boys in our class in the test results that Class rep pasted this morning.”

Monica’s hands flew to her mouth and her eyes popped.

“I know right,” Franca had continued, “I was surprised and excited too. And honestly, it makes me want to try some of things that mummy said I couldn’t do.”

Monica had shot her a disapproving look.

Franca groaned and rolled her eyes.

“I know. I know but I just feel… It feels like I could just do anything you know.”

Franca pulled her sweater over her head.

“Come here…,” Monica replied hugging her, “Being a woman is not easy but we will learn every day.”

After their conversation, Monica mentioned everything to Sister Rose, Franca’s godmother. That resulted in a three-hour lecture on how as a lady, you must know your place and never compete or let your words or actions suggest that you’re competing with men. When the counselling session was over, Sister Rose made Franca promise that she wouldn’t score too highly next time so she won’t scare boys who were interested in her away.

Unfortunately, Franca did and she never aced another test like that again.

Do you know that telling your girls to be content with just being average actually makes them grow into women who don’t want much out of life? Do you know that some of the things we tell our girls stifle their true nature and make them people who must conform to particular rules, behavior, thought pattern and even career choices? Why do we force girls to be domestic but we don’t bother about whether a man can even light a fire? Why do we tell girls to dumb down, instead of realizing their full potential, just so they won’t scare men away?

Stop this! Your girls are humans too with their own individual personalities, likes and dislikes. Don’t tell them who they should be or what they can like or not like! Don’t hold them back from achieving their dreams. Don’t tell them they’re trying too hard or aiming too high! Don’t train them to see themselves as someone who was born or created to serve men even at the expense of her happiness. Teach them that what they think, what they like and what they are interested in matters. Teach them not to wallow in limitations. The root of these stereotypes is based on culture. Is it then a crime to be born a female? Must women wallow in limitations as a result of cultural values? Should their human rights be infringed upon based on her gender. Culture to me should be an element of appreciation.

Oh culture, you definitely can’t limit me, can u please be enhanced. I do love cultural values at least it makes me to appreciate the fact that variety is the spice of life. I walk, live and act out according to God’s purpose for my gender. Let my mind be renewed based on God’s word for my gender not on cultural beliefs. Christ is my standard not culture. 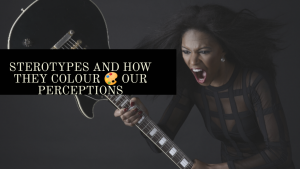 STEREOTYPES AND HOW THEY COLOUR OUR PERCEPTIONS

2 thoughts on “STEREOTYPES AND HOW THEY COLOUR OUR PERCEPTIONS”