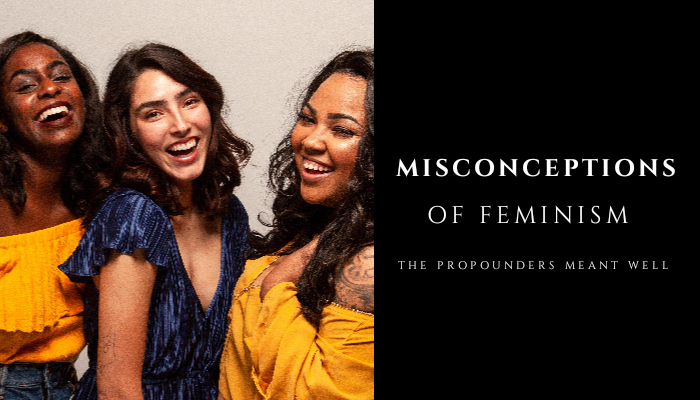 Many people bash feminism today because they misunderstand it or have a wrong notion about the movement. Some see it as a man-hating marriage-breaking movement. Others see it as a cause championing some values that are not aligned with what they stand for and so are not comfortable with it. While some others see it as a scheme trying to overthrow men. A good number of people, even those who believe in equality, refuse to be associated with the word “feminism” because a good number of key or forefront advocates have ideals or a lifestyle they don’t want to emulate or be associated with. But is a concept or idea defined by the people representing it or do the people representing the idea let the idea define them? To understand what feminism really is, we have to look at the dictionary definition of feminism and go back to where it all began. According to the dictionary, feminism is the belief that men and women are equal and thus deserve equal rights and opportunities. Simply put, Feminism is the belief in the social, political and economic equality of the sexes.

I stand for gender equality because I have always believed that men and women are equal. As a result of what I do, a lot of people call me feminists and some attach the concept with negativity. I studied the history of feminism. I wanted to know how it all began and why feminism. From my studies, I was able to understand that feminism started because women were not allowed in the classrooms. Women weren’t allowed to go to work either. Women were not allowed to vote. Women were always seen as second-class citizens. Women were not allowed to write (there are actual records of women who wrote using male pen names just because it was unheard of for women to write). Women weren’t allowed to become paid professionals. Women were not allowed to own property. Women were not recognized by the law as adults or as parents or individuals capable of speaking for themselves. Hence, people rose up to fight and protest against it. Little by little, women started getting their rights. Gender inequality still exists today in various strata and sectors of community and that’s why feminism still exists but the way some people go about it is giving a lot of people cause for concern. Some people who have never read or understood what it is about wear the tag and make all forms of statements and propositions. While people who hate the cause, find every opportunity to bash feminism because of these people who don’t understand what it is about.

A great number of people see feminists as angry, bitter people who don’t want anything to do with marriage or family. But they are only saying this because of the tone with which some social media feminists handle issues and the kind of statements they make. Some of these people who bash the movement have never read anything about feminism before. They don’t realize that them (if they’re female) and their siblings, wives and friends are educated and able to vote, read, write, work and get equal pay as their male counterparts because people fought for it. Realizing that this cause is a noble one should put things in perspective. Your like or dislike for a cause should stem from its ideals not from the individual lives of some of the people who champion it. We see some Christians and some pastors and people who should be role models in the faith acting wrongly and doing things that are not in any way associated with the ideals of Christianity. But do we see Christians dissociating themselves from the faith because of the bad eggs? No for most of us. This is simply because they know what they believe and what they stand for and it doesn’t depend on what someone else does. The same thing applies to Muslims. We hear about terrorist groups that associate themselves with Islam and cause harm to people by bombing public places, hijacking airplanes and kidnapping or killing women and children. But no true Muslim ever dissociates himself from the faith because they know that those actions are not in line with the ideals of Islam. Why can’t we extend this same attitude to feminism? That someone calls herself a feminist and does wrong doesn’t mean that feminism itself is wrong.

Some people reject the concept of feminism on the grounds that men and women are not the same (biologically and physiologically) and so there can be no equality. Gender equality does not mean samenss. T this line of argument is ridiculous. We believe that people of different races, tribes and ethnic groups are equal. Does that mean they are the same? We have people with dark skin and some with lighter skin. We have people with curly hair, some with straight hair. Even among the male gender, some people are well-built, some are lean. Some are short, some are tall. Do we now say that people are not equal because of their physical and biological differences? Who gets to decide who is superior to the other and with what parameters? The key similarity or reason why everyone is equal in value regardless of what they are or how they look like is because we are all humans. And because we are humans, we are equal in value. This is what feminism is about – reminding us about our humanity. Men and women are equal in value. No gender is superior or inferior to the other. That’s what feminism seeks to ensure.

For every cause that starts out well, there are bound to be extremists and people who deviate from the original intent of the movement. For example, a popular or highly read scholar, writer or professor or an authority can decide to come up with her own theory maybe because of past experiences or deep-seated hatred and form her own branch or version of feminism. She might say something like: All women should start blackmailing men. Therefore, it is accepted as a type of feminism and says I name it blackmail feminism. Does it make it right? Does this mean that this is what the earlier proponents of feminism fought for? There are different types of feminism and some do not even align with my values yet the fundamental which the propounders fought for is still a worthy cause to me. That I am educated today, that I have a career today and some benefits I have today. Some women fought for it. Can we then say those who started it have done badly because of some extremists bastardizing the cause?

We have a lot of feminists who love being women and embrace their feminity and love a man and want a good marriage. To think feminism is against marriage is ridiculous and funny. It is only against society limiting women and making them beings whose only ambition and purpose in life is to get married and bear children especially if it is not what they want but pushed to. It is even more ridiculous when people see a feminist getting married and they feel awkward.

Why anyone would think feminism equates to misandry (hatred for men) is also ludicrous. But then it is understandable because of the way it is being portrayed by some people on social media in the extremist angle. As a lady who fights for a cause that men and women are equal alone, I have heard several comments: “Oh, she is a feminist, she wont marry”, ‘she hates men’, ‘she hates manhood’’ and so on. When I hear such, it feels ridiculous because I don’t see reasons why I will want to hate men? And again, why will I hate marriage? I mean, I have male figures who I respect so much in my life. I’ve also seen very beautiful marriages blossom all around me. A great number of people that have come through for me in this life journey are males. I have a father who has stood for me so amazingly well. So why will I hate manhood or what it represents? If I am doing that, that will be acting contrary to what I’m advocating for because saying I hate men is like sparking off another form of inequality. God is love, why will I hate another human he has created?

What I am after is justice and fairness. I have never seen men as a threat or people I want to overthrow. For me, unity is the key.  In fact, the two genders have key roles to play and the differences we have reinforce mutual dependence on each other. Co-existing in peace, unity and harmony is key. As a woman, I want success in every area of my life. Getting married and having success in my marital life is a big deal to me too. But it’s not all I want. It’s not all I want to live for. I want to be all-rounder as much as I can in every area of my life so getting misinterpretations about the cause I fight for then makes me feel awkward. I stand for gender equality because I deserve to have goals, ambition and aspirations just like any human.

I hear things like, “What exactly do you think you are changing? Does it make any difference now?” But then those who started the cause back then did a great job and it yielded results we see today. You would agree with me that there have been some improvements and they didn’t just happen overnight. Some of these changes are not for now but like a drop of water forms large oceans with time, the change we advocate for will yield fruits later. Mary Slessor, the person who fought against killing of twins did not just do it for her generation but did it for even generations to come. If the belief that twins were evil was not cancelled, I would not have been alive today because I am a twin.Lastly, some people see a number of feminists as biased because they are championing girls rights alone. But really, it’s the patriarchal system that informed this. Also, most feminists are women who understood the struggles of womanhood better because that is their reality. This does not mean we should push men aside because the cause becomes much more achievable if everyone is involved. Then I tell men, if you want to also drive a change, you understand manhood better, there is a lot to be done in ensuring we have more responsible men, especially fathers, 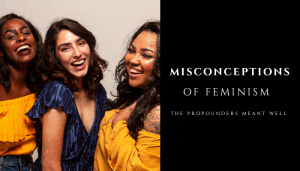 so do not trivialize anyone’s cause or what they are fighting for.

4 thoughts on “MISCONCEPTIONS OF FEMINISM : THE PROPOUNDERS MEANT WELL.”