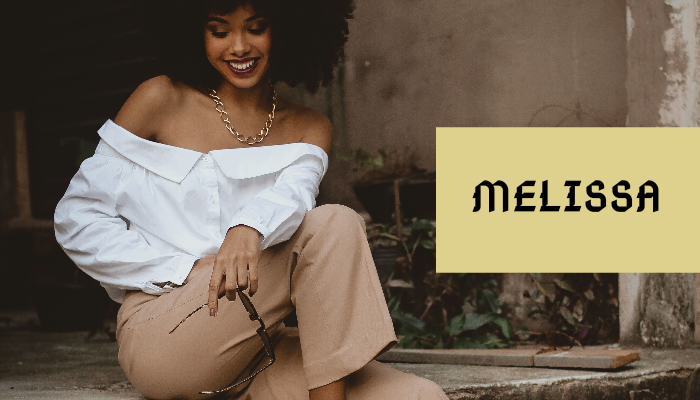 Growing up, Melissa was different from the rest of us. While other girls wanted to play house and build sandcastles, she memorized the current affairs and listened to the news. In primary school, she would argue with the boys in our class and take part in debates. Luckily, our school was gender-inclusive and so they let her be class captain because of how smart she was. At the end of every school year, she was always the leader of the year. No one cared about our welfare like she did. Melissa was always ready to fight for our rights. She always put others first. She loved to serve and never saw leadership as a tool for oppressing her peers.

In secondary school, her light shone brighter. Everyone knew what she stood for and she knew how to make her voice heard. We all admired her courage and outspokenness. Slowly, she was blossoming into a strong woman. Sometimes, I feared that she was too aggressive in her opinions. I also feared that she was unlike any lady I knew for she wasn’t afraid to match men word for word in debates and in arguments. She also wasn’t afraid to insist on the right things being done. She was never uncouth or rude. Her voice was always level. She spoke politely but firmly and her eyes were always ready to look into anyone’s. Inwardly, I admired her.

When she entered university and started staying in the hostel, she realized that the boys’ hostel and girls hostel seemed to operate by a different set of rules. The boys had a TV in their common room. Every weekend, they would catch up with their favourite TV shows and watch football. But the girls’ common room had become a reading room. There was no TV or DSTV decoder. It was just a room full of long benches that the porter locked and unlocked anytime she wished. After a few weeks of staying in the hostel, Melissa started asking questions. At first, the porter didn’t like the questions and tried to shush Melissa. But Melissa was not someone you silenced. She knew how to be heard. She took the matter up with the Dean of Student Affairs and before long, we had a new TV and DSTV installed. That single act earned her massive respect in the hostel.

We became best of friends a year afterwards when she saved me from the hostel porter one Friday night. Usually, lights out were by 10:00 pm and the porter locked the gate by 9:45 pm.  That night, the porter announced that there was going to be an emergency meeting and the gate would be locked earlier. But she didn’t circulate the information on time so I didn’t hear about it. By the time I arrived at the hostel by 9:30 pm, the gate was locked. I knocked hard but the porter ignored me. So, I called Melissa. Immediately, she went to the porter and asked her to kindly open the door. At first, she didn’t want to but after giving her a few points to consider, she did.

After then, she became my best friend. When she wanted to become hostel governor, I helped her campaign and I made sure she won. When she wanted to be the class representative, I was also a huge support. She won that too. Soon, she started talking about Student Union politics. She got into Congress. Unlike the few ladies there, she went there to be heard. She was a woman of vision, eloquence and action. She had brilliant ideas and she marshalled them out with authority.

In our fourth year, she told me she wanted to contest for Student Union president. That was when I knew my best friend had gone mad. I was shocked. Wasn’t it already too much that she was all over the place like a man? Why did she want to change history by doing something no girl had ever dared in our school? As a good friend, I tried to dissuade her. But all my reasoning fell on deaf ears because Melissa was determined to contest in the elections. Reluctantly, I gave her my support but I knew that it would have been better if she ran for vice. That’s what I thought women were suitable for. I’d never seen a woman in charge (in that capacity,)

Unfortunately, she lost the election. But her loss was easily predictable. I knew she would from the start because of the reaction we received from many of the students and lecturers. The loss was dream-crushing. Melissa cried all night. All the people she’d helped and everyone she’d fought for abandoned her because of her gender. I almost did too but I had chosen to be friends with her and so I knew that I had to stick around even on the days I didn’t understand her dreams. Interestingly, the elections made me question so many things. I knew how much Melissa was willing to do for our school. I knew that Melissa was visionary and wanted to make things better. And so, that night, I asked myself if it was a crime that she was a woman?

After my sober reflections, I realized that there was really nothing wrong with Melissa or her dream. She had every right to be given a chance to lead like the other candidates. Not just a chance on paper but a chance in people’s hearts. I realized that I was wrong – me and everyone else who thought she wasn’t competent enough just because she was female. So, that night, I apologized to her. I told her I was sorry for suggesting she run for vice president. Then, with all my heart, I told her she would have been an amazing president! She smiled, I was feminist now.

Many times, people conclude that a woman is incompetent or incapable of handling certain positions of authority even before giving her a chance.  This is actually unfair. Sometimes, they use the fact that they’ve had female leaders who were not competent. But is judging someone on the basis of what someone else did really fair? How about we give people chances to prove themselves rather than take their chances away beforehand? Also, I think more women should support women leadership and the idea of women breaking glass ceilings and shattering all the societal constructs and stereotypes. This would go a long way in providing women with the relevant leadership experience they need. It’ll also give young girls positive models to look up to.

11 thoughts on “Melissa (A short story)”