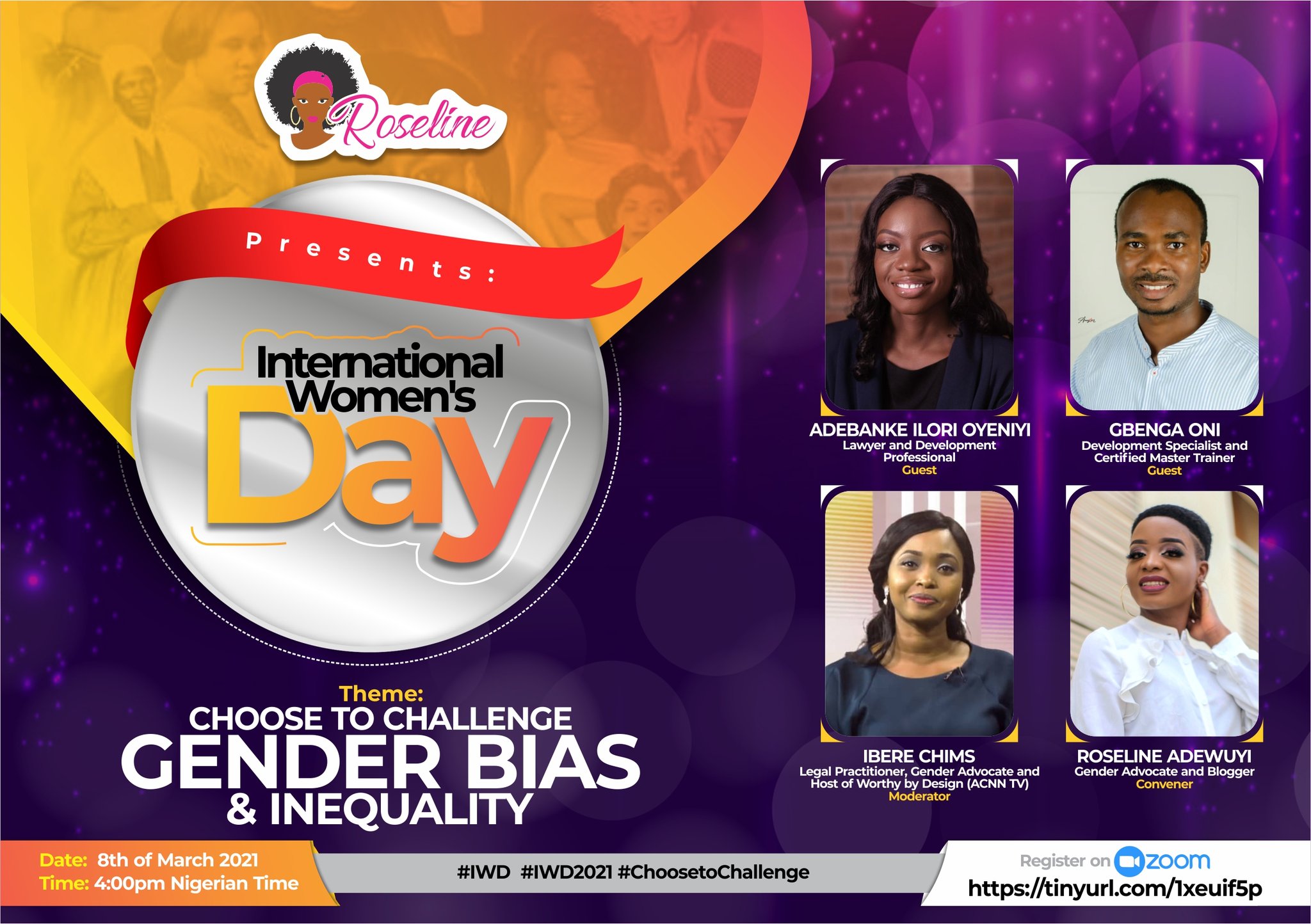 The webinar started with an opening speech by me which resounded the essence and the relevance of International Women’s Day that is being celebrated globally. Afterward, the moderator, Ibere Chims took over by introducing the speakers.

The first speaker, Adebanke Ilori, spoke on the harmful practices that limit women, especially in the Nigerian context. She made several illustrations on practices embedded in the cultural framework in our society that limit women. She highlighted some important scenarios in the corporate world where these cultural biases still exist. An example she cited is instances where women are always called upon to serve tea in the room during meetings.

She mentioned female privileges, and this really resonated with me. Oftentimes, I have had discussions with some ladies who say that they do not really understand the fuss about women’s empowerment. To them, women have it all. She addressed this misconception by saying that some people are blind to the realities of others because they talk from a place of privilege.

Adebanke Ilori talked extensively about the place of socialization and how it hinders women in our society. She stated how Gender roles serve as systemic barriers for women in their careers and emphasized the need for recommendations to be made to ensure that this is changed. She also stated that men do not have things going perfectly for them but there are privileges they still have.

After Banke’s session, Mr. Gbenga Oni started by talking about culture and the idea that culture is shifting and is dynamic so we should accommodate that. He mentioned that our approach should not be all out for attacking culture because most times, the gatekeepers will definitely fight back. He went on to speak on the need for advocates to be conscious of the language used but in all not sounding patronizing too. He rounded up by saying that men do have privileges and that they should use their privileges to empower women.

The moderator concluded by calling everyone to do an appraisal of their biases. There were contributions from one of the participants, Balogun Solomon Ayo on the impact of religion around the discourse which was insightful.

1. Banke addressed thoughts about Tokenism from a political perspective that it is used as a façade, as a means not to address the real issues.

2. How to localize advocacy:

a. Mr. Gbenga highlighted various steps among which are the need to engage groups like Boy’s Brigade and Girl Scout in order to take the conversation to the streets and not just for the educated ones on social media.

b. Instead of the current westernized approach that breeds suspicion, they should localize their Advocacy.

c. The current blame/shame rhetoric should be changed into a space for healing and sharing.

d. Instead of generalization of issues facing women, we should approach it from the point of view of intersectionality.

e. We should be promoting change instead of attacking culture.

f. Make this conversation a human right one.

g. We should be careful how our campaign language is phrased. For example, there is the language of the “future is woman”, most people might understand the intent, but such language is promoting resistance instead of inviting allies. The future should be for everyone.

3. “In a situation where a girl is being corrected for talking to her male counterpart (age mates and classmate) unruly, just because he is a boy. What can one do?” Someone asked. Mr. Gbenga mentioned that teachers are also influenced by cultural practice and there is the need for training of teachers in our schools to teach them about conversations around gender equality.

4. “A girl that wants to challenge gender inequality but her parents are gatekeepers of the patriarchal system and she’s still dependent on them, what can she do or navigate this?” Adebanke summed it up with the idea that slow and steady does it. Parents have grown certain mentalities and mindsets right from time so it will be unrealistic to just want to shove everything down their throat. They have imbibed a lot for years so the conversations around these things will be done bit by bit with then.

5. “How can girls be encouraged to take up roles that are considered to be for men?” Adebanke mentioned that mentorship is very important in guiding young ladies.

I am grateful to all participants who took out the time to be part of the conversation. Thank you, John Oluwadero for the opportunity to use BNI’s Global School Language Zoom details. Thank you Hammed Kayode Alabi for encouraging me to take this up. To my parents and family, thank you for being a great support system. Thank you to God who made this possible and made it a success. It can only be him. All Glory and Honour belongs t him