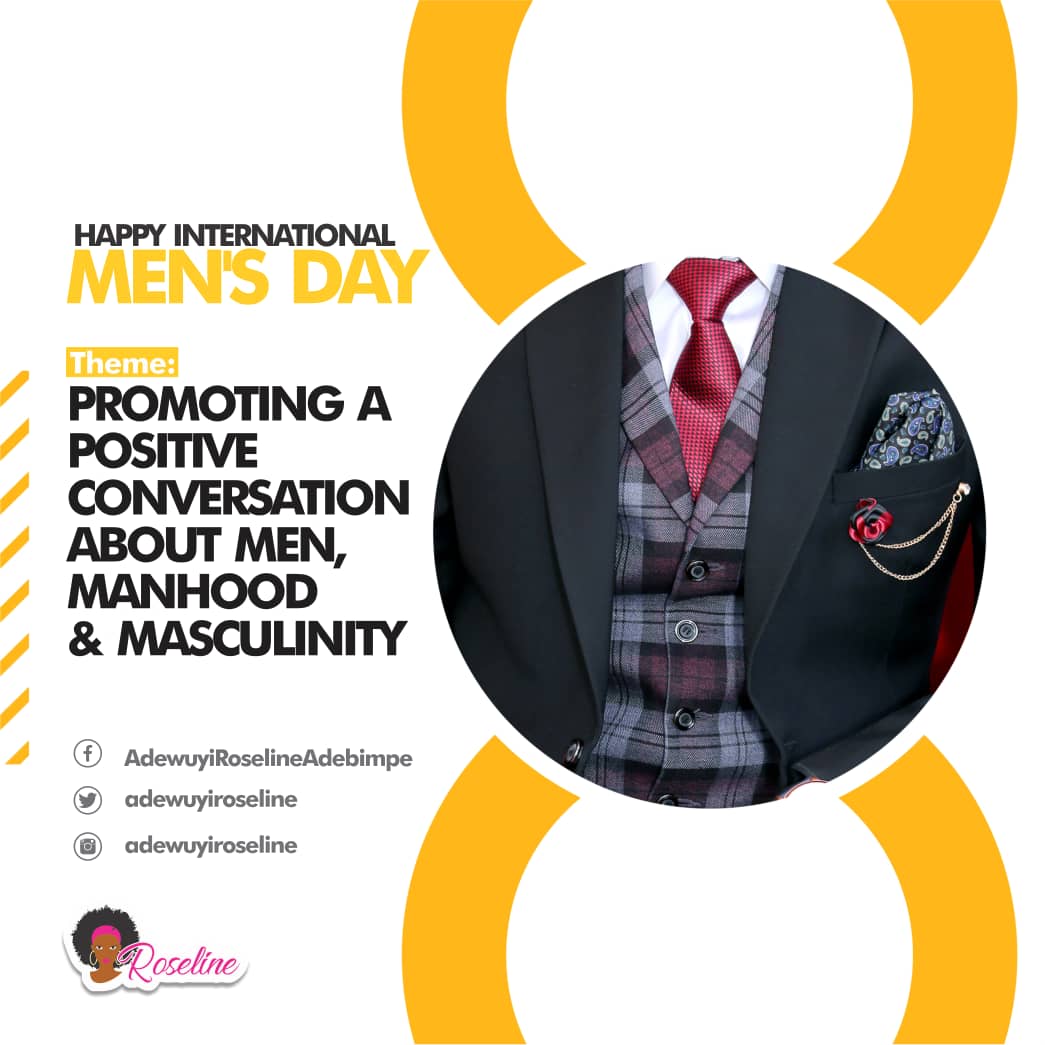 Promoting a positive conversation about men, manhood and masculinity.

It’s International men’s day and for this year, I would love to speak on the theme: Promoting a positive conversation about men, manhood and masculinity. For decades, masculinity has been associated with toughness and certain toxicity. Men are not encouraged to feel pain, be weak sometimes or be clueless about things. They’re supposed to always have things figured out, take initiative, lead and be strong. They are also expected to react in certain ways to show strength and manliness when situations come up. While this can be great sometimes, expecting a person to always be these things can be overbearing. That’s why when they are hurt or they experience great intensity of pain, some of them lash out rather than show weakness or cry.

Today, we have come a long way in our definition of masculinity. The world is realizing that there is no one way to “be a man”. By that, it’s doing away with the stereotypes associated with masculinity. A man doesn’t have to be the strongest person in the room physically. He does not have to react with violence when issues or situations come up. He also doesn’t have to be the leader of the organization. By carrying on conversations about gender equality and gender roles, we see that men can also be whatever they want — as much as women can. A man can be a nurse, a teacher, a secretary, a babysitter, a receptionist and it doesn’t make him less a man. He can love ballet, crocheting, sewing, hairdressing, cooking and any of the activities previously associated with the female gender and it does not in any way make him female.

Men are realizing that they deserve a break sometimes. They don’t have to have it all figured out all the time. They don’t have to have all the answers. And they’re allowed to be vulnerable, open and honest with their feelings. Thus, they can feel without being shamed because they are humans too. In today’s world, we encourage our men to reach in deep and connect with their emotions. We’re sparking off conversations from time to time to let them know that showing your feelings is not weakness. Neither is being compassionate and emotionally aware or available. We are happy that with these conversations gaining momentum and popularity, more men are becoming ones who choose conversation over clenched fists.

In all, healthy masculinity exists in a man who is capable of loving himself. He is present, grounded and in touch with his emotions. He’s not scared to cry or show weakness. He’s also not ashamed to show that he needs people. He is compassionate and that is his strength. He is connected and his worth is not measured in how much he takes or achieves but how he is able to love and give. He has heart and he is truly caring because he is emotionally available.

Here’s are a few ways you can help promote healthy masculinity:

Hopefully, as we encourage more men to get in touch with their true self, our world will be a more beautiful place. Men will experience what it means to live their best lives devoid of any unnecessary pressure to be a certain way or to be tough all the time. In time, the suicide rates recorded among men would drop drastically. Violence would also reduce because more men would know how to have difficult conversations and let out their emotions the right way — rather than bottle it all up till they explode. More fathers will be present. More men would show how deeply they feel or care about their families and the people they love. They will also learn to ask for help when they need to and things will be a lot better for us all.