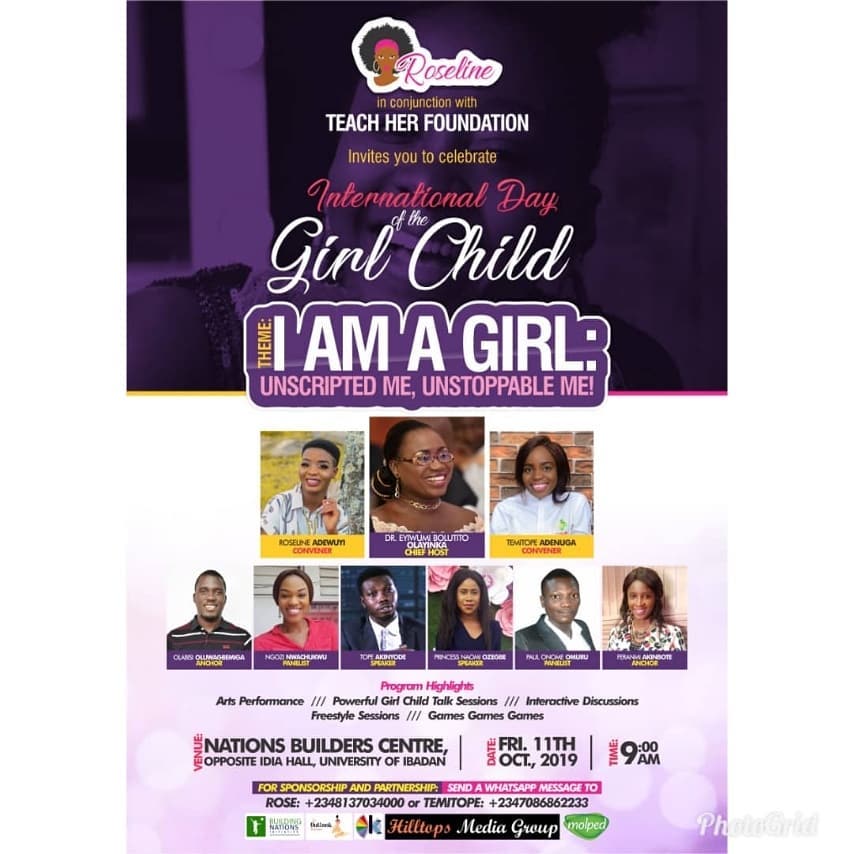 In present-day Nigeria, the advocacy for the education of the girl-child has gained astronomical audience and enviable attention.

Why? No one wants to be labelled unsympathetic towards the girl-child in a bid to realise her dreams, with or without her voice defining who she wants to be.

The sixty-four-thousand-dollar question remains: when a girl-child is offered or given education, should she be offered a role or guided to choose her own roleplay in the society?

At this year’s International Day of the Girl-child, the paradigm will shift from limiting the girl-child’s expectations to providing her with rubrics that will guide her into choosing herself, at all times, and not who the society wants her to become.

The society has conditioned a good number of the girl-child to appreciate every opportunity that comes their way without reference to their own effort. This reinforces a dependent mentality that inhibits the child’s quest to grow and think out of the box, defy norms and beat limitations that are within the reach of the society.

The clock is ticking down to the International Day of the Gild-child where we shall examine the prospect of having a girl-child that will break the cage and build her own world from the wreckage.

The dream of any child should be positively reinforced because no human has a definitive say in what another human should and would become, over a period of time.

No human’s desire should be tailored to the demands and expectations of another, the reason irrespective. Our society is bedeviled by series of scourges, today, because we do not seek to embrace, enforce and enhance equality in every stratum. A caged dream cannot fly. A boxed dream cannot see the light of day. A shackled soul cannot be creative to troubleshoot.

This year, at the International Day of the Girl-child, we seek to examine the strengths of the girl-child when ample is given to her to diversify and explore her choices and chances, in relation to those made available to the boy-child.

When a child is given freewill and a voice, they get their self-worth promoted and self-esteem boosted. They learn to see themselves as an important and valued member of a society. Through the choices that they are availed of, their opinions that are reviewed, their feelings and emotions that are paid attention to, they will develop at an exponential rate that defies all logic.

This year’s International Day of the Girl-child promises to shed light on the impact of unchaining every child, not just the girl-child, as a means to breeding self-propelling, autodidactic and personally-motivated humans who can proffer solutions to the teeming problems that our society faces, on a daily basis.

This is our duty at the International Day of the Girl-child. We look forward to seeing you and partnering with us on this noble quest.

We believe that like every child, the girl-child deserves every trace of our attention. And defining who a child should be before they get a chance to form their own thoughts. Many parents project professions for their children even before the child begins to totter let alone convey their mind successfully. This is totally wrong. A child should be trained in the way that they want to go; not in the way that a parent or guardian wants them to. A child should have their own footsteps mapped after their own dreams; not engraved after the footprints of someone else.

It is our primal dream that the child should be spontaneous as they sought to become life-changers, trendsetters, pacesetters and world builders.

At this year’s International Day of the Girl-child, we accept that the onus lies on us to guide these precocious beings right; if we don’t, we would forever be in the wrong because there are a lot of misconceptions that need to be reviewed and consequently re-written about what needs to be done to raise them right.

Unbox a child and they would go define what they will become. Guide them to choose; don’t choose for them. Encourage them to pour out their minds to you; don’t shut them down.

The girl-child should never be at the mercy of the society; she is not a pawn. She deserves to be treated with dignity. Hence, focus should be constantly paid to her desires and how she plans to realise them, without being impelled to making a decision under duress. The world is big enough for her voice to be heard. The earth is fertile enough for her dreams to grow. Never should she be boxed. Not once should she be allowed to waste away, in a box.

We look forward to receiving you at this year’s International Day of the Girl-child as we discuss the prospects of the uncaged girl-child!

Creativity is watered right when a long rope is given to an individual to explore everything at their disposal. Ingenuity resides in every human so long they are groomed right. But when a child’s talent is restrained, either deliberately or inadvertently, the productivity rate becomes low, the impact level is significantly affected. A cage limits. A box inhibits. Say no to a child’s role being predetermined by any human or factor.

No doubt, an actor that sticks to the dictates of a script may thrill the audience, so long as the script is captivating. But have you taken a second to reflect on the likelihood that provision may never be made for the actor’s creativity? Because the expectations of such an actor has been set in stone, they may become uncomfortable with their role over time. They may become unhappy and miserable. Heck, a day may come when they may decide that they are done with that life, hoping to venture into another field, provided it is not too late.

Keep this image in your head.

This is exactly what becomes of a child who has been handed a script, and expected to dogmatically adhere to its instructions. Such a child, eventually, lashes out because they had a dream that should have been nurtured. Such a child would want to exercise freewill, without the fear of being constrained by external agencies.

This is our goal, this year, at the International Day of the Girl-child. We look forward to seeing you!