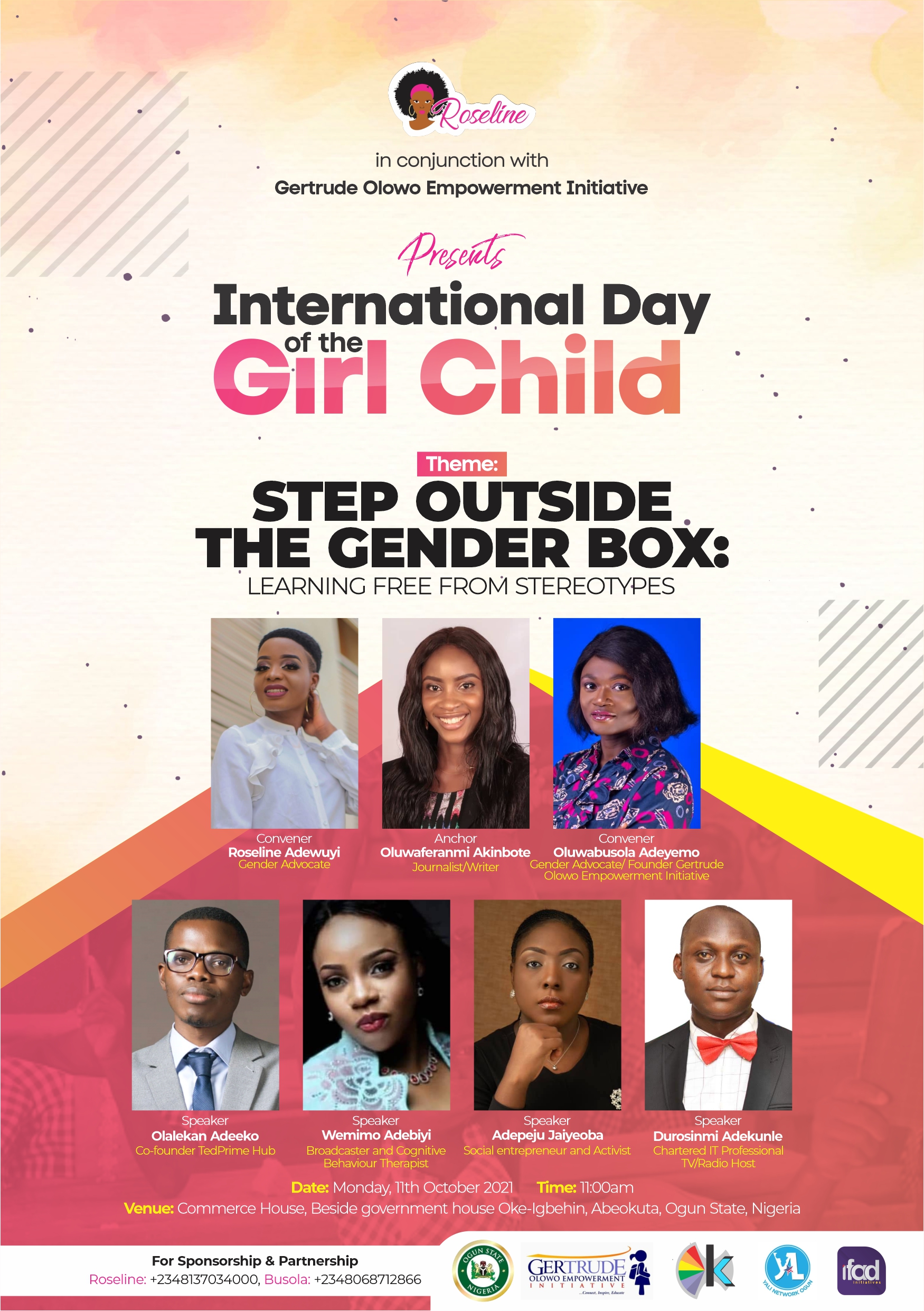 COUNTDOWN DAY ONE A
Refusing to abandon your gender prejudices is a learning stereotype that needs a change. Learn the dictates of an equal world. Unlearn biases. Relearn equality.
COUNTDOWN DAY ONE B
I am a girlchild who seeks to thrive outside the box of limitations. I hunger for learning in a world of stereotypes. I desire achievements based on my strengths and weaknesses. Not from pity. Not through favour.

COUNTDOWN DAY TWO A
Cage a bird of air; it loses the rope of its freedom,
and the inherent choice to fly;
it loses the cutting edge of its bliss and lustre.
Box a girlchild; she turns a slave in her kingdom,
and becomes a shadow of her life—
she becomes nothing but a breathing spectre.
Let her be free!
COUNTDOWN DAY TWO B
I am an apex human. My genitals do not design what I learn or what I choose. I am the girlchild; I choose what badges of knowledge. I am proud of my successes and not disappointed in my failures; they mould me.

COUNTDOWN DAY THREE A
I am a bungle of joy that has a brilliant mind
I am a ray of hope that craves her special shine.
I am a beacon that radiates fancy lights.
I am an intentional learner, too. I am she/her.
COUNTDOWN DAY THREE B
If your girlchild decides on going to a fashion school to change the fashion world, forcing her to study medicine to save lives is criminal. This, too, is a stereotype that you need to unlearn.
COUNTDOWN DAY FOUR A
Equality is not a promised spread of 50:50 in words, and a 30:70 in actions.
It is 50:50, either in public places or behind the scenes; either at home, or in class.
COUNTDOWN DAY FOUR B
Let her follow the paths of her dreams, and quest for her passion, not live yours. Let her learn, even if to make mistakes. Not toe your line to avoid pitfalls.

COUNTDOWN DAY SIX A
A mass of muscles does not make a boy
A lack of it does not make a ‘weak’ girlchild.
So, learning should be an equal shaping field for dreams and desires;
an equal forge to mould their goals and stoke their fires.

COUNTDOWN DAY SIX B
A girlchild that learns free of stereotypes will not just be mentally robust, physically strong, emotionally confident, socially motivated, but also consciously liberated and charged to advance selfless causes.

COUNTDOWN DAY SEVEN A
A learning environment should be created to foster equality, not to limit potentials or opportunities. So, spread the deck. Let that girlchild pick her aces.
COUNTDOWN DAY SEVEN B
A team comprises of people of equal standards and needs. Learners are a team of individuals. They are humans who should be taught respecting their goals and needs with equality.

COUNTDOWN DAY EIGHT A
I could lead a class because I can work for it. I can top the class because I am capable of intellectual wonders. I do not curry favours. Let me learn free of stereotypes.

COUNTDOWN DAY EIGHT B
To teach a girlchild in a learning environment without prejudices is to plant the seed of growth for a nation, expose it to the sunlight of value, and water it with the fluids of self-reliance. When it blooms, it becomes a sturdy tree independently thrives.
COUNTDOWN DAY NINE A
I am a breathing load of talents and intelligence. I do not grovel for chances. I create them because I deserve them. I break the box of stereotypes. I am the best at what I do.
COUNTDOWN DAY NINE B
We want a boychild chooses his path in life, he is respected. But when a girlchild attempts the same. We see her as rebellious, heady, and proud. Erase the stereotypes.

COUNTDOWN DAY TEN A
A girlchild is to independence of thoughts and liberty of choices as a teacher is to teaching, and a learner is to learning. She lives at the epicentre of her decisions.

COUNTDOWN DAY TEN B
For the world to advance, a girlchild should get an equal chance as a boychild in and out of the classroom, and wherever else learning takes place. An educated girlchild is a world changer.