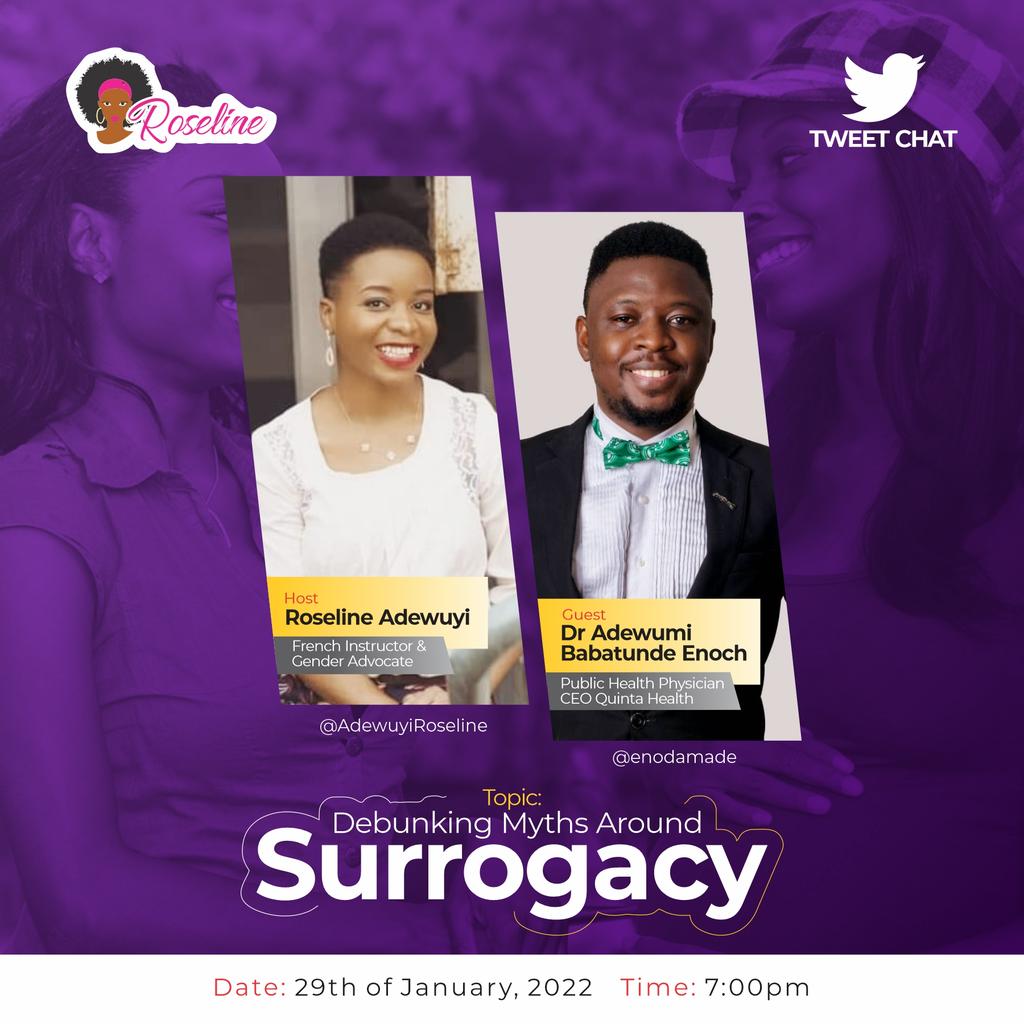 Here is the compilation of the Twitter Chat with Dr. Adewumi Babatunde Enoch

Q1: First of all, What is surrogacy?

A1: Surrogacy is defined as the practice where a woman (a surrogate) carries a child for another person(s) (the commissioning or intending parents) due to a prior arrangement that the child would be handed over to the commissioning parent at birth.

Q2: What is the procedure for surrogacy?

A2: The first process is to select a surrogate and sign a contract. The surrogate must have already had at least one living child. A surrogate with no history of childbirth is ineligible.
Then ensure that all the blood works are clean in some climes they don’t allow people with some infectious diseases like HIV and Hepatitis B except the surrogate has the same conditions.

Although, some studies have shown it has no effect on the embryo or the mother.
Determine if the commissioning parents both have viable gametes. The gametes are withdrawn and artificially inseminated via IVF, once an embryo develops it is put in the surrogate who carries it to term. While they are followed up and watched carefully.

The method of delivery, for surrogacy, has to be CS. This is usually in the contract. The surrogate is well-informed before time. Notably, in the case, that the child does not survive to term. The surrogate is not of them died after three days.

Surrogates are not paid if the child is not carried to term. This is also included in the contract. There are cases where surrogates change their mind halfway and terminate the pregnancy that’s part of the shortfall on the side of the commissioning parents.

This reflects the absence of a legal framework guiding this high-risk venture in this country because once they there is no law that regulates surrogacy which creates loopholes that is some facilities use guarantors and they ensure the whole family is involved.

A3: Yes, it is currently done in Nigeria. But there is no established law to protect the surrogates and the commissioning parents. Meaning that as much as we try to have a proper legal backup or legal framework, because we have contracts that we tried to, like, cover all the loopholes, or all the possible bad scenarios that could come up, but something could go wrong, and it could blow up in the faces of either the surrogates would be at loss or suffer, or the intending parents in the case of if the surrogate decides to claim the child, if she goes to court to claim the child the court will agree, although as we both know now, as far as the commissioning parents own the egg & sperm, the child has no genetic connection with the woman. But there is no law to back anybody up for so if the surrogate decides to take the child, there is nothing you can do. This does happen. Although we have contracts where the surrogates would sign after delivery nothing that she would willingly give up the child. While we have put up a strong legal system to avoid problems. There are no acts or any legislation that covers surrogacy in Nigeria.

Q4: How are Nigerians responding to this method of having children?

A4: With mixed feelings and skepticism. Only a particular class of people have, or think about it even being in the system, I can tell you that even when it is suggested or when clinicals symptoms show that surrogacy is the next step.

Some of the couples want to make sure that they exhaust all possible options before they go for that option. To an average Nigerian, it sounds like an abomination. Even the parents that are involved themselves, we sometimes find it hard to convince them that child is not genetically connected to a surrogate mom. I will tell you, we’ve been in a system that most of our clients that actually opt for surrogates are Nigerians leaving from abroad. The ratio of clients from abroad to clients based in Nigeria is six to four or seven to three. Clearly, people don’t understand as much as they should about it yet. So I would say the reception is biased only people that are in the system understands it. Even among young people, you’ll be surprised at the reaction to things like this.

So, it is not even about a generational gap or something. It’s just information that people do not have. As such, it is very difficult for people to accept what they don’t understand in this part of the world.

So, I will say we are trying, but we’re not there yet, the reception is not as good as it should be.

Q5: What are the various reasons why couples opt for surrogacy?

A5: Not having a uterus as a result of a hysterectomy or being born without a functional uterus
Significant uterine abnormalities, including uterine scarring (Asherman’s Syndrome) and inability to develop a thick, supportive uterine lining.
Significant medical conditions that make carrying a pregnancy risky for a woman’s health (such as hypertension)
Chronic reproductive loss
Cancer
Some people don’t want to carry pregnancy for personal reasons.

Q6: What are the cultural misconceptions and misinformation surrounding surrogacy?

A6: Many people believe that it is not a natural means of conception and as such it is tampering with nature People feel they won’t bond well with the children because they didn’t carry them.
Traditionally people believe that infertility is a curse and if they don’t bear their children it means they are cursed. They feel the children will carry the traits of the surrogate and not the biological parents. They can also be stigmatized.

Q7: Is surrogacy the same as adoption? If not, how so?

A7: Surrogacy is not the same thing as adoption. In adoption, the child is not biologically related to the parents while in surrogacy they carry the genes of the parent.

Q8: Why are people usually reluctant to explore surrogacy?

A8 : As mentioned earlier, some people do not understand because they feel like another person that they don’t know would carry their child, and you know this thing about women carrying their own children. It is special.

I understand that sometimes the women find it difficult to agree to surrogacy because they’ll feel like they missed out on that bond. So even when that child is carrying their Gene 100% they find it difficult to bond with the child because somewhere at the back of their head they were not the one that carried the child they may be feeling like the child is not their child. The connection a reason why people are reluctant, the fear of not being able to connect with the child. It happens actually but for a little while.

Q9: What are the cost implications of surrogacy?

A9: Well, let me just say, within the range of two to 5 million naira depending. It can even be more than that. Because the way surrogacy works, if you’re using an agency or even if you’re working directly with the IVF clinic and you get your surrogate.

Q10: What obligations do intending parents owe the surrogate mother and vice versa?

Then I mentioned this earlier, now the commissioning parent has to provide the surrogates accommodation, because of cultural norms and all these things, sometimes the lady when she’s pregnant, she may not want to stay in the place where she’s leaving, because everybody will see she’s pregnant. And then after she delivers, she kind of has to explain why she doesn’t have a child anymore.

Also, the provision of accommodation for the surrogate is part of the contract agreement, because in my agency, we have surrogates that are married, and their husbands are their surety. For these ones, we still give them accommodation money and it is up to them to do whatever they want to do. So, accommodation is one of the things that is required, then a stipend you have to give the surrogates feeding money every month so that your child will be born healthy. So that surrogates can feed optimally, you know, then of course, before all of these, even before he gets all of these, they would have agreed upon final payments. Some surrogates are very lucky. They actually have intending parents that take them abroad to go and give birth.

Q11: What is your advice to intending couples who want to explore this option?

A11: For intending couples who want to explore this option, It is not a crime especially, if your doctor recommends that as your last resort, I think it’s something that should be explored, especially if both couple have viable gametes.

I think it is something that should be explored. The child is still yours You just have to break that mental barrier. the child is very much your child. I think it’s an option that should be open for exploration. people need to talk about it more.

Q12: What role can the media and health advocates play in educating and enlightening people so as to keep them informed on this issue?

Sometimes the women that are involved in those things did not do it willingly. So, when people speak up more, especially, people that have used surrogates in Nigeria. If they can speak up more about it, I think it would gradually become more acceptable.

We can raise conversations about the stigmatization of surrogacy and artificial reproductive systems in general. The more we begin to talk about these things the more acceptable they become.
As it is, infertility is gradually becoming a choice because there are solutions for everyone today. The only limitation is the cost of funding surrogacy. 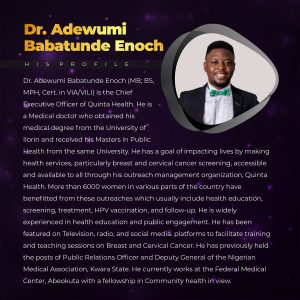 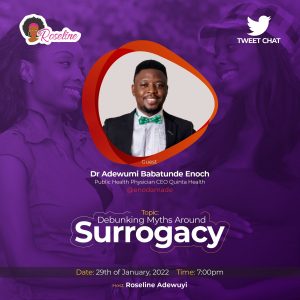