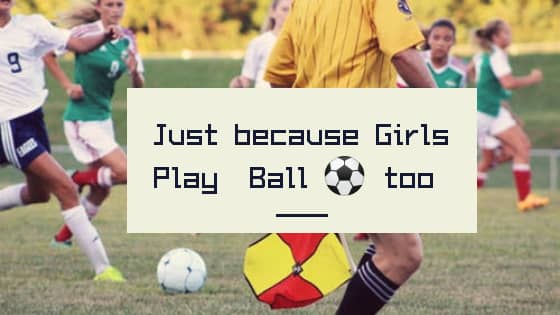 Just because Girls Play Ball too.

I am that girl that grew up in the midst of 4 males. My mum and I were the only females around.  I like to call our family the ‘House of Blue’ because that was the colour we kept in mind while shopping for clothes, accessories or shoes. Most of the boys were older than me and we shared hobbies. My favourite hobby, among all the things I loved doing like singing and dancing, was playing football.

I can remember running to get the football as my brothers and I, ran to the community field every weekend to play football. I usually woke up earlier than the boys on Saturday’s to do some morning exercises before our regular Saturday morning training. I was number 9, a striker. And I was really good at this – No goal keeper in our community could withstand my goal shots! It was so glaring that I had a future in this!

As my mammary glands increased and developed, my mum’s expression of disapproval began. Each time I wore my jersey and picked up the ball, she frowned and sent me back shouting,

“Adaobi! Where are you going to? Is it football you will be playing in your husband’s house? Come back here now! There is House work to do!”

She did this so many times until I finally realized that I had been banned from doing what I loved because I was female. Slowly, I understood that it was okay for my brothers to go out and play football but I could not because as a woman, all I had to live and prepare for was marriage.

But after a few weeks of suppression, I rebelled. Something in me couldn’t let me go on like this. My drive and passion was stronger than the words my mother had spoken over and over to me. So, I snuck out of the house without permission and continued playing. I played and won medals for my community and I never stopped playing since then. Today, I play countries, win medals and have my fun. Football is everything to me!

Although I fought the stereotypes and won, something in me still breaks till today. Right from when the difference between boy and girl was obvious, whenever I asked my friends to come watch me play, they gave me this sneer and laughed me to scorn.

Others said, “The big obstacles on their chest won’t let them run well. Let them keep deceiving themselves there!”

It hurts to know that I still get that from people around me today. And it’s not just them. So many people all over the world feel like girls playing ball is a waste of time. Some judge us to be incompetent even before they watch us play. Some already think our game would be a circus play even before the kick off! It really hurts to be seen as less just because you are female. It really hurts to not be given a chance or the benefit of the doubt because of your gender.

This is a call to women out there. Female footballers, up your game. Support women who play. Watch our matches. Talk about them. Tweet it. Post it on facebook. Share it on Instagram and Discuss it on whatsapp. Let the world know that something is going on. Let the world know the Female World Cup is coming up In June, 2019. And you’re cheering massively for us! We promise to play our hearts and give you a good game! Just let us know you will be there. Let us know you will be watching. And you will tell a friend. 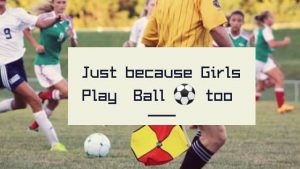 Just Because Girls Play Ball Too